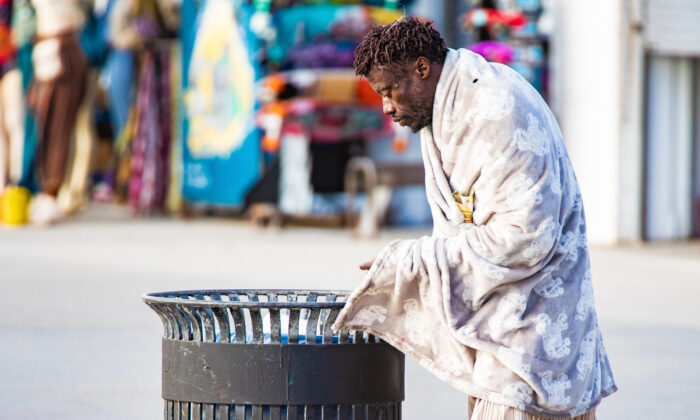 A homeless man looks in a trash can near the boardwalk at Venice Beach in Los Angeles on Jan. 27, 2021. (John Fredricks/The Epoch Times)
Southern California

Supportive housing for the growing homeless population of Los Angeles is not being built fast enough to keep up with demand, despite ballot measures passed to address the problem, the city controller says.

“Unfortunately what we’ve seen is, I think, a combination of neglect, a lack of focus, a lack of leadership, a lack of accountability, deficient priorities, siloed government, fractured government, and a lot of good intentions that have gone bad,” L.A. City Controller Ron Galperin said at a Venice Beach Neighborhood Council on Feb. 18.

Venice Beach, along with downtown’s Skid Row and the San Fernando Valley’s Woodland Hills, is among the hardest-hit areas in the county.

“Nobody expected these units would be built in one day, but as of this month, only 489 of the bond-funded units are ready for occupancy,” Galperin said.

Galperin had released an Action Plan in September 2020 that addressed shortcomings in the implementation of 2016’s Proposition HHH, a $1.2 billion city bond measure to fund housing for the homeless. The Venice council invited him to speak in response to complaints by local residents of problems caused by the neighborhood’s growing homeless population.

There are currently 41,000 homeless people on the streets of L.A., with 70 percent of them living unsheltered. Galperin said the problem is growing, despite many well-intentioned initiatives and investments. He cited “everything from street cleanups, to LAHSA [Los Angeles Homeless Services Authority], to Triple H, to Measure H in the county,” a 1/4 percent sales tax increase that passed in 2017 to generate an estimated $355 million annually to fund rental subsidies and housing.

Since Proposition HHH passed, homelessness has grown 45 percent, Galperin’s report stated. Only three projects have been completed, including 179 supportive units and 49 non-supportive units.

According to Galperin, only 19 percent of units in the development pipeline—or 1,363 units—will be built before 2022. Seventy-three percent, or 5,522 supportive units and 1,557 non-supportive units, are in pre-development and haven’t begun construction. Galperin said most of those units would not be completed before 2024.

“The results that were promised to the voters have not at all been realized at this point, and that to me is something that is utterly unacceptable,” he said, adding it’s taking “much too long” to build the units.

As of last August, the city had earmarked roughly $1.17 billion of the Proposition HHH funds to execute projects in the pipeline. But the controller’s review noted that “estimated project timelines were not aligned with the growing magnitude of the homeless crisis”—and the development costs were high.

The cost per unit is averaging from $550,000 to $750,000, Galperin said. The least expensive unit costs $324,771. Proposition HHH funding composes 25 percent of each project’s total budget; the remaining funds come from the federal government, private entities, the state government, and L.A. County.

Prior to the pandemic, 15 projects were given extensions up to more than a year to finish. But COVID-19 delays “will likely result in higher development costs, like loan interest, holding costs on land, and construction costs,” according to the report, adding that the estimated cost per unit had already increased 10 percent for projects in pre-development.

“I truly believe that if you put money to use in a thoughtful way, you can actually get much greater results,” he said. He added he’d long been an advocate for other imperfect interim housing solutions, including the adaptive reuse of properties, such as contained safe parking lots or vacated shopping malls.

Galperin also cited a 30 percent increase in deaths on city streets in 2020—around 1,300 people.

“Imagine that in the city with so much wealth and so many good things that we have going for us, that you have so many people who have died on our streets; it’s really unconscionable,” he said.

According to the Los Angeles Homeless Services Authority (LAHSA), homelessness rates increase when median rents in a region exceed 22 percent of median income, and rises even more sharply at 32 percent. In L.A., the median rent is 46.7 percent—nearly half of median income.

Venice Beach in particular has become “an incredible center for homelessness,” Galperin said.

“There is only, let’s be frank, so much that any area can bear before it begins to affect each and every single aspect of people’s lives … and we are seeing that” in Venice, he said.

“And you know, there’s an interesting kind of push-pull. On the one hand, you want to provide as many services in an area where you have people; on the other hand, sometimes the more facilities and the more services that you have can also serve as something of a magnet.”

As a recommendation to officials, Galpin concluded the city should reconsider using HHH funds to supplement interim housing solutions at lower-development costs to get people housed quicker.