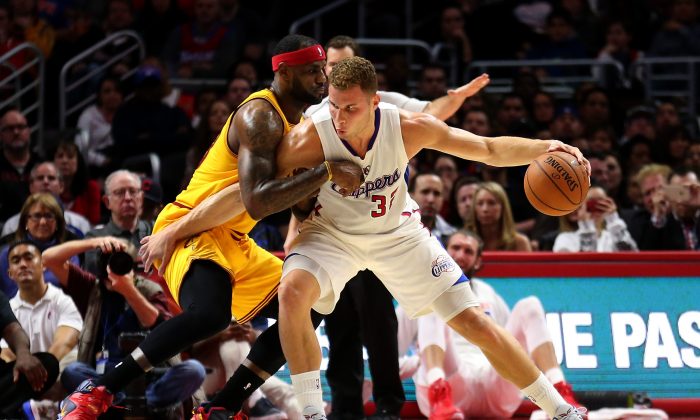 Blake Griffin #32 of the Los Angeles Clippers posts up LeBron James #23 of the Cleveland Cavaliers at Staples Center on January 16, 2015 in Los Angeles, California. (Photo by Stephen Dunn/Getty Images)
NBA

Blake Griffin’s injury is very untimely for the Los Angeles Clippers, and could ultimately lead to the team missing the playoffs.

Neither Griffin nor J.J. Redick played on Sunday against the Oklahoma City Thunder, a game that was pretty much over before it started. The Clippers lost 131-108.

Redick could be back for the Clippers game against the Houston Rockets on Wednesday, L.A.’s last game before the All-Star break. But Griffin’s injury is more significant. Team officials hope he can return in as little as two weeks, in which case he would play against the Memphis Grizzlies on February 23, the Clippers first game after the extended break. But there are fears that he could miss as long as six weeks.

If that’s the case, the Clippers could find themselves dropping down the standings fast. And in the Western Conference, the end result could be missing the playoffs.

Los Angeles, after the loss to the Thunder on Sunday, are the seventh seed in the West with a 33-19 record. They’re 3.5 games ahead of the Phoenix Suns, the eighth seed. The Clippers face two issues. They have a slew of games coming up against tough opponents, and without Griffin, they’ll likely lose a lot of them.

The Thunder absolutely smashed them, and you could expect almost all of the following games to be losses–Rockets (twice), Mavericks (twice), Thunder (again), Pelicans, Warriors, Blazers, Grizzlies, Spurs, Bulls, and Wizards.

If Griffin is out for all those games–the worst case scenario of him being out until March 22–and they only manage to win, say, two, then that would be at least 10 losses in the next 19 games. That’s if the Clippers can beat lesser teams like the Timberwolves and Kings. If things get really bad, they could go something like 4-15 over the stretch.

That kind of record over the next month-and-a-half involves the other issue. The Suns are only several games back from the Clippers, which wouldn’t be a huge problem in itself since the Clippers could hold on to the eighth seed if Phoenix passes them. But the Pelicans (1.5 games behind Phoenix) and Thunder (2.5 games behind Phoenix) are very much in the mix. If Griffin is out for so long and the losses do pile up, all three teams could conceivably pass them.

There’s other variables involved, for sure. Redick’s return should help since Los Angeles has a paltry bench that gets even worse when Spencer Hawes starts in place of Griffin. Los Angeles could nab a free agent or two, as Doc Rivers noted recently they’ll target players who were bought out by other teams. Griffin could come back in just a week or two, likely propelling the Clippers back up the standings into a semi-comfortable position.

But the Clippers have to be careful. Even with Griffin, the team had lost four out of five games, getting beaten by the Pelicans, Nets, Cavaliers, and Raptors. The Clippers need every win they can get, and Griffin needs to come back as soon as possible.