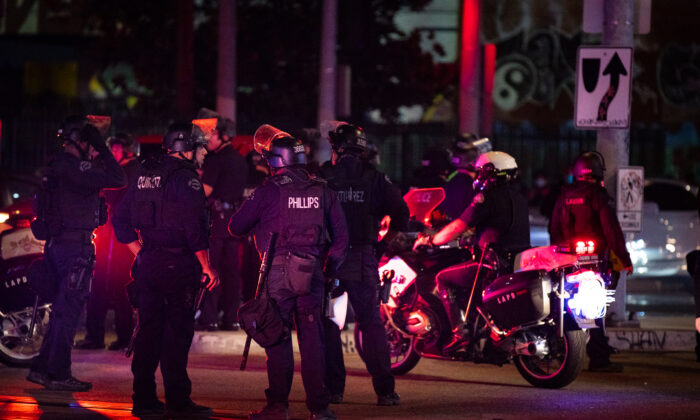 LA City Attorney: Council Does Not Have Authority to Instruct LAPD to Hand Over Evidence

LOS ANGELES, Calif.—The Los Angeles City Council on Feb. 9 approved measures to instruct the Los Angeles Police Department (LAPD) to provide internal information—including unreleased bodycam footage—regarding the death of a teenage girl last year during an officer-involved altercation in a clothing store. The council coupled the motion with another measure requesting an overview of all officer-related shootings in 2021.

However, according to the city attorney, the council does not have the authority to determine the public release of LAPD records. Instead, it falls into the hands of the police commission and the chief of police.

The city attorney’s office pointed to LA’s administrative code on public records which “lays out in detail” how city departments release records to the public. According to the city code, the head of each department makes the final call on authorizing the release of department records. In this case, the Police Commission will determine whether they will grant the council’s request for LAPD data.

“This office shares the desire for the city to be as transparent as possible with respect to the details of the incident,” City Attorney Michael Feuer wrote in a letter to the council on Feb. 8.

Feuer said LAPD’s recordings should be released as soon as possible, but the “timing” of the release is up to the police commission—not the city council—as it must “take into consideration a number of factors including the potential to compromise any ongoing investigation.”

Councilmembers Paul Krekorian, Kevin de León, and Monica Rodriguez introduced a motion on Jan. 7 seeking to obtain information from the LAPD on several issues relating to an officer-involved shooting that left one innocent 14-year-old girl killed in a dressing room, one dead, and another injured just two days before Christmas.

“The circumstances of this shooting serve as a reminder that when a person calls 911 to report violence, the police are prepared to respond with force to counter that violence,” the council motion reads. “All of society is grappling with the question of how and when force should be used in particular circumstances.”

In a case LAPD Chief Michel Moore called “devastating and tragic,” officers responded to calls of a suspect assaulting multiple women and a potential shooting in progress at the North Hollywood Burlington store location on Dec. 23, 2021.

That following Monday, Dec. 27, the LAPD released a 35-minute compilation of bodycam and store footage from the incident.

Footage released from the store shows the suspect acting erratically, swinging the bike cables near customers and attempting to disarm one of the security cameras in the store. At one point in the video, the footage shows the suspect removing his pants at the bottom of the store’s escalator and grabbing a woman. The victim was able to escape.

The video also shows at least six officers entering the store looking for the suspect, who officers discovered was assaulting women in the store and repeatedly beating a female victim with a bicycle cable lock.

An officer fired off three rounds killing the suspect—identified as 24-year-old Daniel Lopez—who was standing in front of the dressing room. One of the bullets penetrated through the dressing room wall behind Lopez and killed the teenage girl.

The girl, identified as Valentina Orellana-Peralta, was dress shopping for her upcoming quinceañera when she was struck by the stray bullet. Local activists were outraged and called for the officer to immediately be terminated.

“There are no words that can describe the depth of the sorrow we feel for this tragic outcome,” LAPD Cpt. Stacy Spell said at the time.

Additionally, city officials want the LAPD to provide data of all officer-involved shootings last year “including the status, timeline, and findings of non-compliance with the LAPD’s Use of Force Policy as compared to findings for the previous five years.”

“So, I hope that when LAPD reports back, that they include a racial and a demographic analysis of the victims of police shootings,” Councilman Mike Bonin said during the Feb. 9 council meeting. “And also like to see in that report detail about how many people who are victims of shootings—fatal and non fatal—were suffering from mental illness and if any mental health resources were used in those incidents.”

Councilmember Nithaya Raman said she hopes reports from LAPD will clarify the incident on Dec. 23 and explain how Orellana-Peralta “could go to a store to try on dresses and close and end up losing her life” or how “Daniel Elena Lopez who didn’t have a gun could be shot and killed.”

According to the council’s motion, officials have already begun to “pursue an alternative means of emergency response” that has a “force-as-a-last resort” approach to erratic encounters with suspects.

Amid outcries from local social justice protests and progressive calls to reform the criminal justice system, the Los Angeles Police Commission revised its Use of Force Policy for the LAPD in December 2021. The new policy requires the following:

• Any officer who witnesses another officer using excessive force to immediately report it and record via bodycam footage.

• Any officers found using excessive force cannot train other officers for at least three years from the date of the complaint.

• Retaliation against officers who report excessive force is prohibited and any cases of retaliation must be reported.

• Officers who witness another officer using excessive force must intervene. If an officer does not intervene, they will face the same level of disciplinary action as the officer committing misconduct.

According to the policy, officers can exercise deadly force if they believe the force is necessary to protect themselves or others from death or severe injury. The policy changes went into effect Jan. 1, 2022.

The Epoch Times reached out to the city attorney’s office but did not hear back by press deadline.