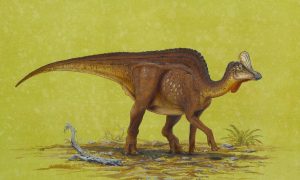 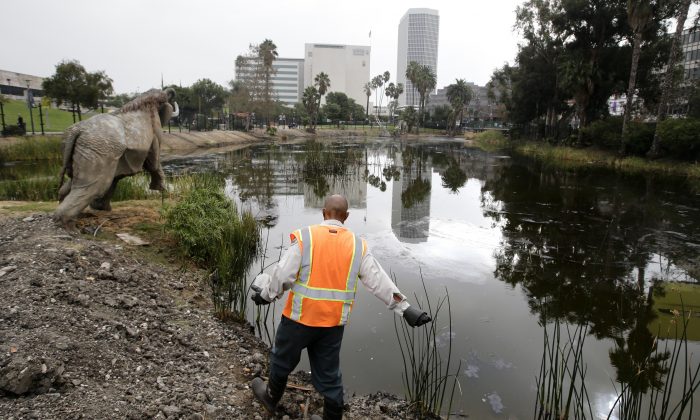 LOS ANGELES—Surrounded by a gooey graveyard of prehistoric beasts, a small crew diligently wades through a backlog of fossil finds from a century of excavation at the La Brea Tar Pits in the heart of Los Angeles.

Digs over the years have unearthed bones of mammoths, mastodons, saber-toothed cats, dire wolves, and other unsuspecting ice age creatures that became trapped in ponds of sticky asphalt. But it’s the smaller discoveries—plants, insects, and rodents—in recent years that are shaping scientists’ views of life in the region 11,000 to 50,000 years ago.

“Earlier excavations really missed a great part of the story,” said John Harris, chief curator at the George C. Page Museum, which oversees the fossil collection. People “were only taking out bones they could see, but it’s the hidden bones that provide clues to the environment,” he said.

The museum Monday celebrated 100 years of digging, which has recovered some 5.5 million bones representing more than 600 species of animals and plants, the richest cache of ice age fossils.

There’s so much left to do that it could easily take another century to complete. On a recent Wednesday, a volunteer in a white lab coat pounded away at a bison skull in the museum’s fishbowl laboratory, where visitors can witness paleontology in action. Nearby, two workers, hunched over microscopes, sorting bone fragments belonging to extinct creatures.

In the back storage, floor-to-ceiling shelves of wooden crates house bones that need to be cleaned, identified, or labeled. The museum estimated it has 100,000 specimens to catalog and another million to scrub.

Long before skyscrapers towered over Wilshire Boulevard, giant beasts ruled the land. Back then, sagebrush scrub covered the basin, home to herds of mammoths, bison, camels, and ground sloths. Mastodons lived in the woodlands. Lurking were meat-eating predators, including saber-toothed cats, dire wolves, and giant jaguars.

Every so often, creatures would get bogged down in pools of water and asphalt that seeped from underground crude oil deposits and die of dehydration or starvation. Stranded animals that appeared to be easy prey then became a trap for predators that also got stuck in the ooze.

In 1913, the predecessor to the Natural History Museum of Los Angeles County launched a two-year project to uncover only the best-preserved mammal bones, largely ignoring everything else. Though the early digs gave scientists a glimpse into the types of animals that roamed, there was still much to be learned.

After the early missteps, scientists in 1969 decided to focus on pulling everything out and revisited a tar pit dubbed Pit 91 to do a more detailed excavation. For nearly 40 years work at Pit 91 dominated the Page Museum’s efforts, as visitors gawked from a viewing platform.

Museum officials temporarily halted digging at Pit 91 several years ago to concentrate on an unexpected trove of ice age fossils that was found during the construction of an underground garage next to the tar pits, located some 7 miles west of downtown Los Angeles.

“I can’t think of any other site that is as rich,” said Sarah George, executive director of the Natural History Museum of Utah.

Every time a foundation is dug, “more old blocks of tar filled with fossils came out of the ground,” said George, who used to work as a curator at the Natural History Museum of Los Angeles County.

No Consensus on Ice Age Extinctions

Despite a century of digging, scientists still can’t agree on how the ice age beasts became extinct. Some suggested that the prehistoric predators may have competed with humans for similar prey and that carnivores ate carcasses out of desperation. But Larisa DeSantis of Vanderbilt University said dental studies of saber-toothed cats and other carnivores suggest they were “living the good life” before they became extinct.

Museum excavators plan to leave some fossils buried—in case better tools are invented to study them in the next century.