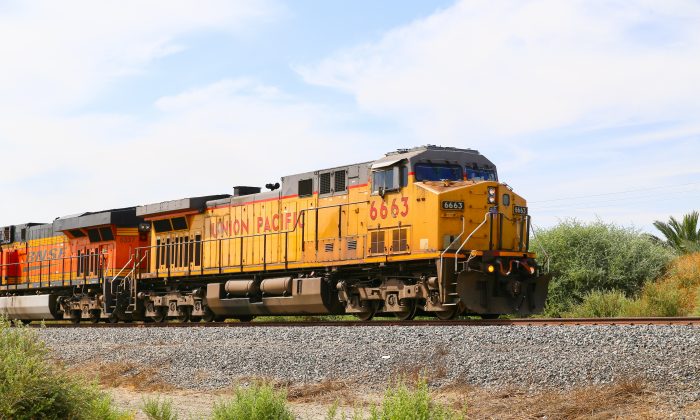 Freight train with both Union Pacific and BNSF engines on track next to California State Route 111. (Michael Rosebrock/Shutterstock)
Southern California

FONTANA, Calif.—Police were investigating the deaths of two people suspected of stealing cargo from containers on a Union Pacific train in Fontana, California, on Dec. 29. The suspects died in a crash after fleeing from police.

A train conductor called police at about 4 a.m. to report a maroon van parked along a stopped train. The van first appeared to have been struck by a train, according to the Fontana Police Department.

Officers responded to the railroad tracks near an industrial area of the city located west of San Bernardino. Upon arrival, they found a cargo theft in progress from one of the train’s boxcars, Fontana Police Spokesman Daniel Romero told The Epoch Times.

“When officers attempted contact, the van fled, and a pursuit ensued,” Romero said.

The pursuit ended in the city of Ontario, about 10 miles west, when the van lost control and crashed into a warehouse at an intersection, Romero told local media. The van was traveling at a high rate of speed and drove into the side of the building, he said.

The suspects, a man and woman, both Hispanic, died at the scene, Romero said. Police have not yet released their identities.

The railway has become a target for thieves as a record number of containers continue to be transported from the Los Angeles and Long Beach ports, officials told The Epoch Times.

“Union Pacific Police had previously notified officers about multiple reports of cargo thefts in that area over the past few months,” Romero said.

A local Union Pacific spokeswoman Lupe Valdez said on Dec. 20 that cargo thefts were continuing to be a problem in the Los Angeles area.

“It’s still challenging,” she said. “We’re working with trying to get folks to realize the impact it’s having on businesses across the board.”

Reported cargo theft on the West Coast of the United States has increased 42 percent compared to last year, according to CargoNet, a cargo industry organization dedicated to the prevention of theft.

CargoNet reported 359 supply chain thefts and fraud incidents across the United States and Canada in the third quarter of 2021. The total loss is estimated at nearly $13 million.

California reported the most cargo theft, accounting for about one-fifth of the reports, followed by Texas and Florida. The average loss per theft was about $144,000, CargoNet said.

“Entering into the final quarter of 2021, CargoNet expects that theft activity will remain elevated. We are concerned about targeting of computer electronics shipments shipping from California, as well as a breakout of full truckload cargo thefts spreading across the eastern half of the United States,” CargoNet Spokeswoman Michelle Pantina said in a statement.

A national Union Pacific spokesperson declined to answer questions about the Fontana incident on Dec. 30.