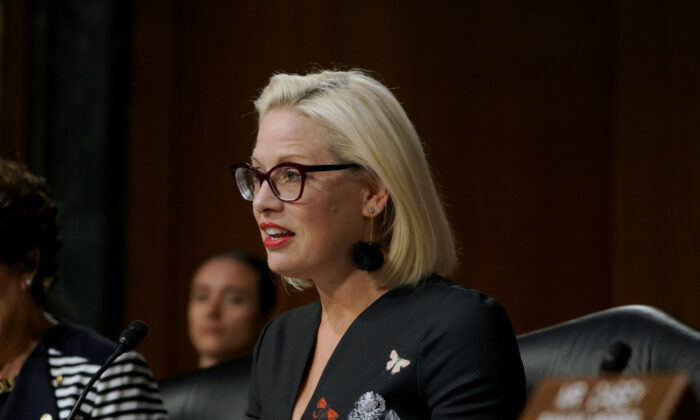 Senator Kyrsten Sinema (D-Ariz.) described her attitude toward watching Democratic presidential primary debates in her own words, in an interview with Politico, “I’m not missing anything. I prefer happiness.”

“Look how happy I am,” Sinema added.

Her political stance differs on some issues from the official positions of the Democratic Party. She voted for the confirmation of President Trump nominees like Attorney General William Barr and Interior Secretary David Bernhardt.

She met with Bernhardt before voting and “carefully considered his nomination,” to make sure that” he is professionally qualified, believes in the mission of the Interior Department, and will faithfully uphold the law,” Sinema said, according to Arizona Mirror.

Sinema is considered a centrist or a moderate Democrat based on her political views and voting record, according to Arizona Central.

She often mingles with Republican lawmakers and considers Senator Ted Cruz (R-Texas) an ally in the Subcommittee on Aviation and Space of the Senate Commerce Committee led by Cruz where she is a ranking member.

When interviewed by “Politico,” Sinema said that she considers herself “independent-minded … And that it’s not super useful to try and convince me otherwise,” said Sinema in this interview.

Her independence spurred criticism among her fellow Democrats, who introduced a resolution in September to censure her for voting too much in alignment with Republicans and President Trump.

Dan O’Neal, the Arizona coordinator for the Progressive Democrats of America, told Arizona Central that the purpose of the censure is to urge Sinema to move to the left.

“The way she is voting is really disappointing. We want Democrats to vote like Democrats and not Republicans. ”

The Arizona Democratic Party suspended the resolution at a meeting a few days later.