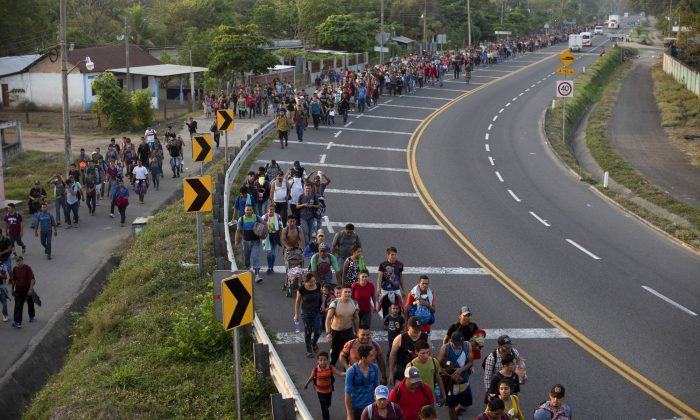 Central American migrants, part of the caravan hoping to reach the U.S. border, walk on the shoulder of a road in Frontera Hidalgo, Mexico, on April 12, 2019. (Isabel Mateos/Photo via AP)
US News

Sen. Kyrsten Sinema is aiming to implement a program at the U.S.-Mexico border that would speed up the removal of migrants without valid asylum claims.

The letter detailed how the pilot program, which is called “Operation Safe Return,” would allow for some migrants to be deported within 15 days.

“This pilot program would apply to families who aren’t claiming ‘credible fear,’ which of course is the first threshold in seeking asylum,” Sinema told The Arizona Republic. “If someone says, ‘I left my country because I can’t make a living,’ [or] ‘It’s hard to take care of my family’—that’s what we call an economic migrant.”

Border Patrol would be given one to three days for “detailed, fair and accurate interviews” with migrant families. If the families are fearful of returning to their home countries, they would be deported, the newspaper reported.

If a family is fearful, the next step would be for asylum officers to conduct a credible-fear interview. The officers would have nine days after the family is caught to do so. After that, the Department of Homeland Security and the Department of Justice would have six days to determine a ruling on the case, according to the report.

“Within approximately 15 days after being encountered, the Department of Homeland Security should remove family units whose negative credible fear determinations are affirmed by the immigration judge,” the letter says.

Hopefully, Operation Safe Return will convince Central Americans, that on a bipartisan basis, America will do everything we can to prevent human traffickers from exploiting our laws and abusing immigrants seeking a better life. https://t.co/4hv2s9n6N8

Sinema will meet with Homeland Security officials, potentially next week, to discuss starting the program, The Arizona Republic reported.

“We wanted to solve the problem,” Sinema said. “We wanted to protect the asylum process for valid applicants.”