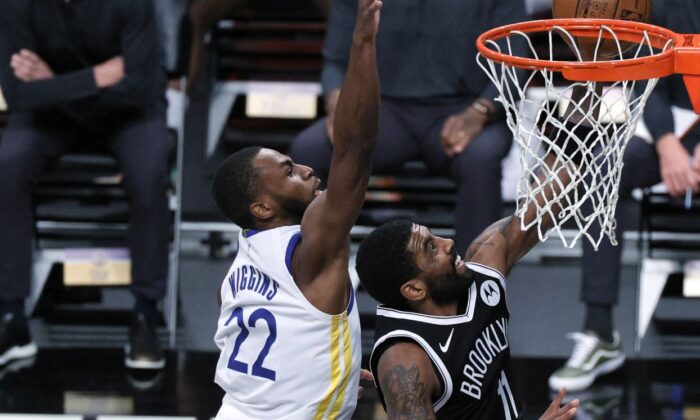 Kyrie Irving #11 of the Brooklyn Nets attempts a layup against Andrew Wiggins #22 of the Golden State Warriors during the second half at Barclays Center on December 22, 2020 (Sarah Stier/Getty Images)
NBA

Kyrie Irving Banned From Nets Until He Receives COVID-19 Vaccination

The NBA’s Brooklyn Nets’ guard Kyrie Irving has been banned from the team until he is fully vaccinated against COVID-19, according to a new statement from the team.

“Given the evolving nature of the situation and after thorough deliberation, we have decided Kyrie Irving will not play or practice with the team until he is eligible to be a full participant. Kyrie has made a personal choice, and we respect his individual right to choose,” Nets General Manager Sean Marks said in a statement from the Nets on Tuesday.

“Currently the choice restricts his ability to be a full-time member of the team, and we will not permit any member of our team to participate with part-time availability,” he added.

Irving was expected to miss home games due to refusing to comply with New York City’s COVID-19 vaccine mandate.

Irving was allowed to practice with the team after the Nets’ training facility was considered private. His return to the team’s home court, however, will remain restricted.

“I think we recognize he’s not playing home games. We’re going to have to for sure play without him this year. So it just depends on when, where and how much,” Nets Head Coach Steve Nash said.

Athletes from New York City-based sports teams who play in an indoor arena are required to receive at least one dose of an authorized COVID-19 vaccine, even if the athletes themselves are not residents of New York City, according to the city’s executive order (pdf).

Irving has not spoken publicly about his decision to refuse to comply with the vaccine mandate since addressing media via a Zoom video in September.

Irving has not confirmed his vaccine status but asked the media for privacy concerning the matter.

Last season, Irving was fined more than $1 million for unexplained absences related to COVID-19 protocols. It is unclear how much Irving will lose sitting out home games this season, though he reportedly makes $400,000 per game.

The news follows other NBA players who felt “forced” to take the COVID-19. Golden State Warriors player Andrew Wiggins expressed frustration over the requirement to take the vaccine in order to continue playing in the NBA.