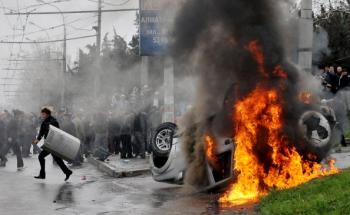 Massive anti-government protests continue to escalate in the Kyrgyzstan capital of Bishkek with protesters badly beating the interior minister, reported The Associated Press.

The protests, in the capital and other provinces, have grown more aggressive and widespread in the impoverished mountainous country of five million people. At least 10 opposition leaders have been detained in the past days, according to media reports.

At the same time, there is no information about the ongoing situation on most governmental websites. There has been an information blockade inside the country with several internet media and TV stations blocked, although some outlets have started broadcasting again.

Opposition supporters are demanding that authoritarian President Kurmanbek Bakiyev resign because of widespread anger over soaring utility costs, increased oppression of civil rights over the last years, and the closing of several opposition newspapers and opposition parties and prohibiting their activities.

An estimated 10,000 of protesters are demonstrating in Bishkek in the central squares, in front of parliament and at the other state offices of the former Soviet Republic. Riot police are reported to have fired at demonstrators, and used tear gas and concussion grenades to crack down on rock-throwing protesters who have tried to get inside the buildings, in one case by truck. The General Prosecutor’s office is on fire, according to radio Svoboda.

Government sources say 40 people have died in the clashes, while opposition members put the number at 100 dead, according to the BBC.

The President is reported to have declared a curfew in several provinces but not in the capital, though some media reports say that there is curfew in Beshkek as well.

Prime Minister Daniyar Usenov said in a statement that the situation has been “stabilized,” but the media reports coming out of the country show that the streets are far from calm.

On Tuesday, in the northeast city of Talal, several thousands opposition supporters reportedly stormed the police station and provincial governmental offices. The same happened in the southern town of Naryn, where protesters were said to be holding talks with the governor on transferring power to the opposition.

The United Nations, the U.S. and other countries have already stressed their concerns about the ongoing anti-government demonstrations and urge all parties to show respect for rule of law and to engage in peaceful talks to resolve the dispute.

The United States is seeking peace in Kyrgyzstan, a strategic partner of the U.S.. The U.S. has an air base in Kyrgyzstan to support its military operations in Afghanistan.