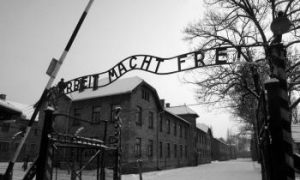 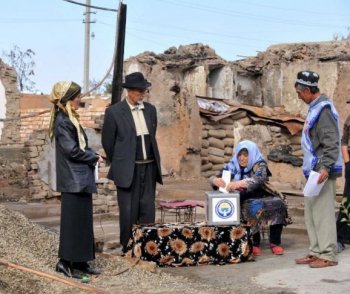 Ethnic Uzbeks vote near their homes in the city of Osh, which was destroyed amid ethnic violence and political unrest earlier this year. (Victor Drachev/AFP/Getty Images)
World

According to the Kyrgyz electoral commission, close to 50 percent of the country’s 2.8 million eligible voters cast their ballots.

There are 29 parties trying to win a majority in the 120-seat Parliament. A cap has been set so that no party can hold more than 65 seats.

Kyrgyz officials and international observers report that in general elections were peaceful and free, but there were also claims of voters being made to vote for specific parties and on other violations that could lead to fraud.

“We had today free, democratic, and open elections which the country had never seen for the past two decades,” said Kyrgyz President Roza Otunbayeva in her video blog.

“Ultimately it is extremely important that everyone accepts such results," said Janez Lenarcic, the director of the Organization of Security Cooperation in Europe’s (OSCE) Office for Democratic Institutions and Human Rights, to Radio Free Europe.

The country has held a constitutional referendum that paved the way for the current elections, and which will allow the country to become the first Central Asian state with a European-style parliamentary system where the prime minister holds more power than the president.

The situation between the Kyrgyz and Uzbek ethnic groups remains tense, following violence in the southern city of Osh in June. The violence followed a state coup in April that left 400 people dead.

“Many are afraid of what will be tomorrow or the day after tomorrow when the elections results are published,” emergencies researcher at Human Rights Watch in Kyrgyzstan, Ole Solvang, said in a telephone interview.

According to Solvang, current lawsuits in Osh over ethnic Uzbeks considered responsible for the June clashes, have only made the situation more tense, and that family members and lawyers of the defendants have faced attacks.

The uprising took place in the Fergana Valley region, a strip of land sandwiched between Kyrgyzstan, Uzbekistan, and Tajikistan, that has been a powder keg for ethnic violence due to the many different minorities living there.

Preliminary results from the parliamentary election show the Ata-Jhurt Party in the lead. The party’s main office in the capital of Bishkek was destroyed in attacks last week.

The attacks were reportedly sparked by a video recording showing a man resembling Ata-Zhurt leader Tashiev, promising to bring deposed President Bakiyev back into the country if the party wins a majority.

The United States has supported Kyrgyzstan’s plans to move the country toward democracy, and a U.S. military base in the country plays an important role in the war in Afghanistan.

Russia also holds a base in Kyrgyzstan, yet is unlikely to be satisfied with the country’s move toward a parliamentary democracy. Russia has claimed that Kyrgyzstan needs a strong rule, or the clan-based society would be caught in endless chaos.

Moscow has given support to some of the leaders of parties currently leading in the parliamentary elections. Among them is the leader of the Ar Namys Party, who met Russian President Dmitry Medvedev and promised to roll back democratic constitutional changes.

The United States has stressed their continued support for Kyrgyzstan, despite Russia-leaning candidates currently in the lead.

”Russia sees, as well as we do, the importance of the transit center, the importance of continuing to help stabilize Afghanistan,” U.S. Assistant Secretary for South and Central Asian Affairs Robert Blake said in the interview with the BBC.