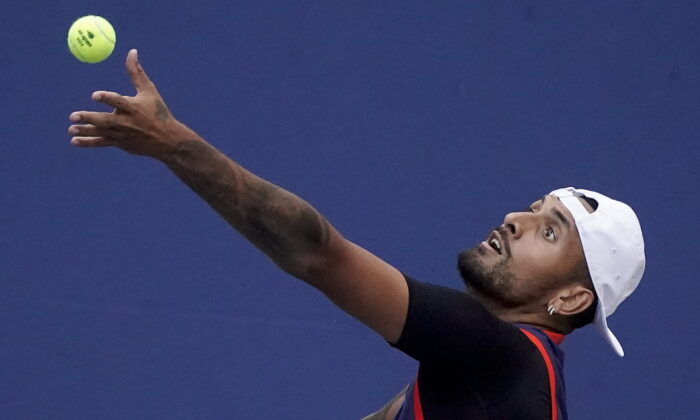 Nick Kyrgios, of Australia, serves to Benjamin Bonzi, of France, during the second round of the US Open tennis championships in New York, Aug. 31, 2022. (John Minchillo/AP Photo)
Tennis

NEW YORK—Nick Kyrgios was bothered by what he thought was the smell of marijuana during his match Wednesday.

The Wimbledon runner-up complained during his second-round victory over Benjamin Bonzi about the scent, asking chair umpire Jaume Campistol to warn the crowd inside Louis Armstrong Stadium.

“You don’t want to remind anyone not to do it or anything?” Kyrgios asked during a changeover in the second set.

Armstrong features concession stands along the concourse level above the court and Campistol appeared to be telling Kyrgios the smell could be coming from their kitchens.

“Obviously, I’m not going to complain about food smells,” Kyrgios responded. “Obviously, not.”

“When I’m running side to side, I’m struggling to breathe,” he said. “Probably not something I want to be breathing in in between points.”

The No. 23 seed from Australia was his usual animated self during the match, carrying on conversations with himself and people in the seats.

He received a warning for using profanity when the target of his anger was somebody in his box who Kyrgios didn’t feel was being supportive enough.

The noise of New York is a challenge for many players, and Kyrgios struggled not only with the chatter of the fans but with the roars of the trains that can be heard from outside the open-air stadium.

“For someone that’s struggled to focus in my career, I’m really trying hard to put my head down and play point by point, try to dig myself out of some certain situations. It’s hard because there’s a lot of distractions,” Kyrgios said.

“Obviously, a lot of heckling going on as well. People are saying things. I got to be very careful with what I say these days.

Kyrgios Fined $7,500 for Conduct in Match

Nick Kyrgios has been fined $7,500 for unsportsmanlike conduct during his second-round victory Wednesday.

Kyrgios was warned after using profanity toward someone in the stands.

It appeared the Wimbledon runner-up was yelling at someone in his own box, telling the person to be more supportive or leave.

The temperamental Australian also complained to the chair umpire about the smell of marijuana uring the second set.

The fine was the highest given to a player at the tournament thus far.