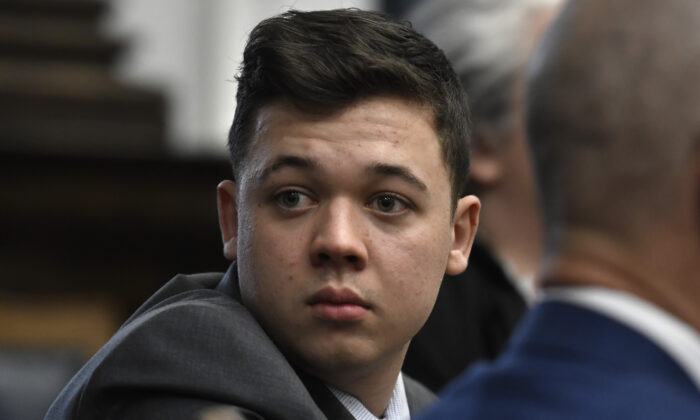 Kyle Rittenhouse looks back as attorneys discuss items in the motion for mistrial presented by his defense during his trial at the Kenosha County Courthouse in Kenosha, Wis., on Nov. 17, 2021. (Sean Krajacic/Pool via Getty Images)
Media & Big Tech

Kyle Rittenhouse Prepares for Lawsuits to ‘Make the Media Pay’

Kyle Rittenhouse confirmed in an interview that he is readying to file lawsuits in a bid to “make the media pay”—months after he was acquitted on several murder charges in connection to the August 2020 shooting during a Wisconsin Black Lives Matter protest and riot.

“We’re going to make the media pay for what they did to me,” Rittenhouse told Fox News’s Tucker Carlson on Monday. “They made it hard for me to live a normal life. … I don’t think I’ll ever be able to work or get a job because I’m afraid an employer may not hire me.”

Neither Rittenhouse nor his lawyer, Todd McMurtry, elaborated on what media outlets or celebrities could face lawsuits, or the amount in damages he will seek.

In the interview, Rittenhouse said that he’s unable to get a job or go to public places without security around him.

“Certainly, Kyle was charged with a crime. News organizations are allowed to report on that,” McMurtry said in the interview. “But calling somebody a murderer in certain circumstances can be actionable.”

The attorney said his team is looking to file a lawsuit against Meta and Facebook CEO Mark Zuckerberg.

“Mark Zuckerberg announced in a videotape that what Kyle was involved in was a mass murder, and that’s clearly defamatory,” McMurtry told Carlson. He was seemingly referring to a post made by Zuckerberg in late August 2020 that address the shooting in Kenosha, Wisconsin.

There are currently additional plans to file lawsuits against members of the media who alleged Rittenhouse is a white supremacist.

“I don’t know how the media can claim that they didn’t make a statement made up out of thin air without engaging in actual malice or, most certainly, negligence,” McMurtry said. “I think we have some strong grounds to proceed.”

“Unfortunately, the end of my high school career was robbed from me. I didn’t have the time other students get to properly prepare for the future. I look forward to attending Blinn College District this year, a feeder school for Texas A&M. I’m excited to join Texas A&M in 2023,” he wrote on Twitter Monday.

Previously, McMurtry represented Covington Catholic student Nicholas Sandmann in his defamation lawsuits against CNN, NBC, the Washington Post, and other outlets. The suits stemmed from a January 2019 incident in which he and other students were confronted by a Native American activist in Washington, D.C.