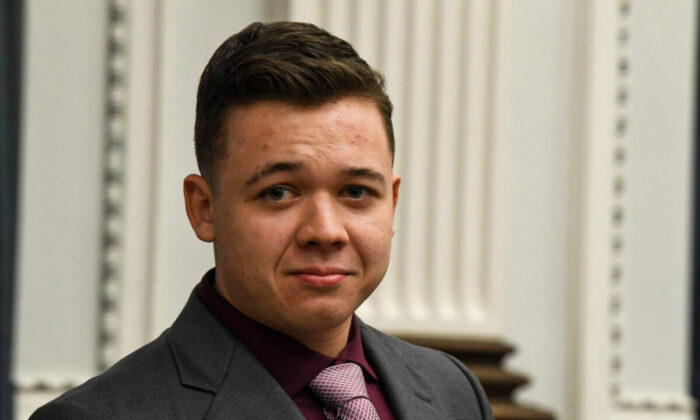 Kyle Rittenhouse looks on after a break during his trial in Kenosha, Wis., on Nov. 9, 2021. (Mark Hertzberg/Pool/Getty Images)
Media & Big Tech

After he was recently acquitted on murder charges, Kyle Rittenhouse suggested certain media outlets may face legal consequences in the near future.

“There’s going to be some media accountability coming soon,” Rittenhouse told Fox News during an interview on Tuesday, without elaborating. There has been speculation that Rittenhouse may file defamation lawsuits against certain media outlets and high-profile individuals for how they portrayed him and the accusations they made against him.

Rittenhouse, 18, then appeared to support lawsuits by Nick Sandmann, who settled with several media outlets over their coverage of a viral incident at Washington’s Lincoln Memorial in 2019.

Earlier this week, the teen was given a standing ovation at a Turning Point USA conference in Phoenix where panelists talked about the 2020 shootings in Kenosha, Wisconsin. Rittenhouse was acquitted on all charges stemming from the incident after arguing he acted in self-defense.

During the event, Rittenhouse suggested that people should “be on the lookout” for a possible lawsuit against certain media outlets that he believes misconstrued the events in Kenosha, the NY Post reported.

Last month, a jury found Rittenhouse not guilty in the deaths of Joseph Rosenbaum and Anthony Huber and the wounding of Gaige Grosskreutz. The shooting occurred during nights of violence, protests, and riots following the officer-involved shooting of Jacob Blake, who had a warrant out for his arrest.

On that night last year, businesses in Kenosha were ransacked and burned after Blake’s shooting, which came several months after an officer was seen kneeling on George Floyd, a convicted felon whose death sparked nationwide unrest, protests, and riots.

The two-week trial captivated the nation’s attention as his defense attorneys said he acted in self-defense, an argument that was corroborated by video evidence. Prosecutors claimed he was the instigator of the violence because he brought a rifle to Kenosha on that night.

If he had been convicted on the most serious charges in the case, he could have faced life in prison.

At one point during the trial, Rittenhouse decided to waive his Fifth Amendment right and testified in his own defense.

“It’s helped me grow a lot, it’s helped me mature,” Rittenhouse said of the trial. “My mentors who have been in my life … they’ve helped make me the person I am today, so thank you for them.”

When asked by Fox News on Tuesday about whether he would do things differently, Rittenhouse said he would.

“[With] what I was dragged through and what I had to go through—to facing life in prison—I wouldn’t say it was worth it,” he said, adding that “hindsight being 20/20.”