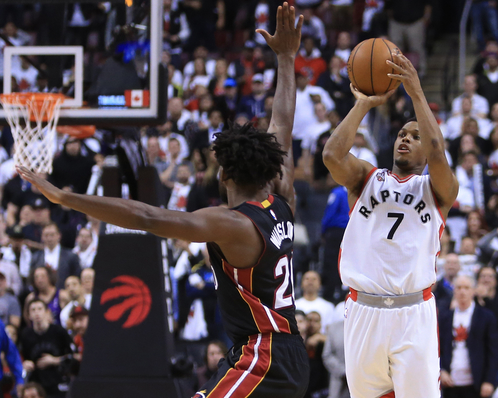 TORONTO, ON - MAY 03: Kyle Lowry #7 of the Toronto Raptors hits a half-court buzzer beater to tie Game One and send it into overtime during the Eastern Conference Semifinals against the Miami Heat during the 2016 NBA Playoffs at the Air Canada Centre on May 3, 2016 in Toronto, Ontario, Canada. NOTE TO USER: User expressly acknowledges and agrees that, by downloading and or using this photograph, User is consenting to the terms and conditions of the Getty Images License Agreement. (Photo by Vaughn Ridley/Getty Images)
NBA

Toronto guard Kyle Lowry hit one of the biggest playoff shots of his career—a dramatic, last-second, half-court shot—to extend the game another five minutes and give the Raptors another chance at winning.

Before the shot, Lowry was 2-for-11 and 0-for-5 on 3-pointers. The buzzer-beater forced overtime between Toronto and Miami in Game 1 of their series. The Heat eventually won though, 102–96.

The second-seeded Raptors won 56 games this season—just one less than Cleveland—and the two-time All-Star Lowry was a big reason why. The 6-foot point guard averaged 21.2 points, 6.4 assists, 4.7 rebounds, and 2.1 steals a game this season, while playing in 77 of 82 games.

In particular, his 212 three-pointers made this season (while hitting 39 percent of his attempts) was fifth-most in the NBA and a career-high for the Villanova product playing on his third NBA team.

But in eight games this postseason, Lowry’s numbers are down. The 30-year-old is averaging 13.0 points per game while hitting just 16 percent of his three-point attempts. Maybe this will get him going.