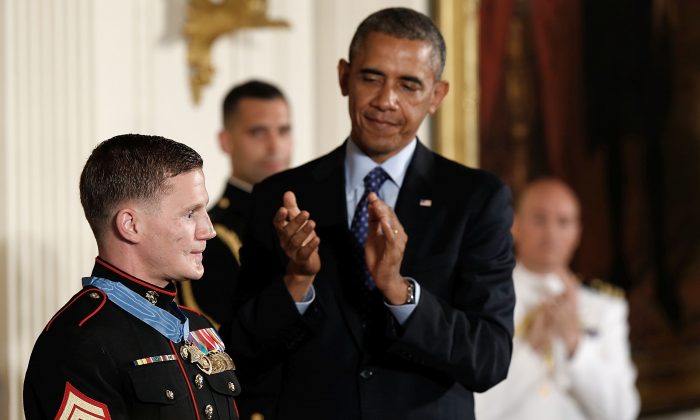 Retired Marine Cpl. William 'Kyle' Carpenter is applauded by U.S. President Barack Obama after receiving the Medal of Honor during a ceremony in the East Room of the White House on June 19, 2014 in Washington, DC. Carpenter received the medal for taking the blast from a grenade to protect fellow Marines and sustained major wounds. Carpenter is the eighth living recipient chosen for the high honor. (Photo by Win McNamee/Getty Images)
US News

A Medal of Honor recipient who lost an eye while taking a grenade blast to save a fellow Marine now faces a hit-and-run charge in South Carolina, police say.

Retired Cpl. Kyle Carpenter, 26, turned himself in and appeared in court Thursday with an attorney on misdemeanor charges of hit-and-run and making an improper left turn, police said in a news release.Carpenter was released on bond, the release said.

Police say a pedestrian who was struck shortly after 8:30 p.m. Dec. 8 was treated at the scene for scrapes and leg injury. The pedestrian, Michael Haddad, declined to be taken to a hospital and is expected to make a full recovery, police said.

The driver left the scene after the pedestrian stood up and walked to the side of the road. The pedestrian then went inside the fitness center and police were called.

Carpenter, who’s now studying at USC, and Haddad have cooperated and there’s no evidence that either was under the influence of alcohol or drugs at the time, police said.

Attorney Butch Bowers, who represents Carpenter, said in an email that Carpenter believed the pedestrian hadn’t been injured based on his “reaction and his ability to continue walking across the street, apparently without difficulty.” Once he learned the pedestrian was injured, Carpenter has cooperated with police and taken responsibility for the accident, Bowers said.

“Kyle is grateful that no one was seriously injured, and he applauds the police for their professionalism.” Bowers said. “Kyle looks forward to continuing his education at USC and working with young people to make sure they stand up for what is right and take responsibility for their actions, just as he has done in this instance.”

Carpenter, a Mississippi native, received the Medal of Honor in June 2014 for his actions as a Marine in Afghanistan in 2010, when he lost an eye. He required almost 40 surgeries and multiple skin grafts, leaving him with a prosthetic eye and a new jaw and teeth, President Barack Obama said at the Medal of Honor ceremony.

He had placed himself between a grenade and Lance Cpl. Nicholas Eufrazio, who received a head injury from shrapnel. Carpenter was severely wounded from head to toe, sustaining a depressed skull and a collapsed right lung, among a long list of other injuries.

He was evacuated and required brain surgery to remove shrapnel. His heart flat-lined three times during treatment, Obama said, and doctors managed to revive him each time.

He was a patient at Walter Reed National Military Medical Center in Bethesda, Maryland, until his retirement for medical reasons in July 2013.