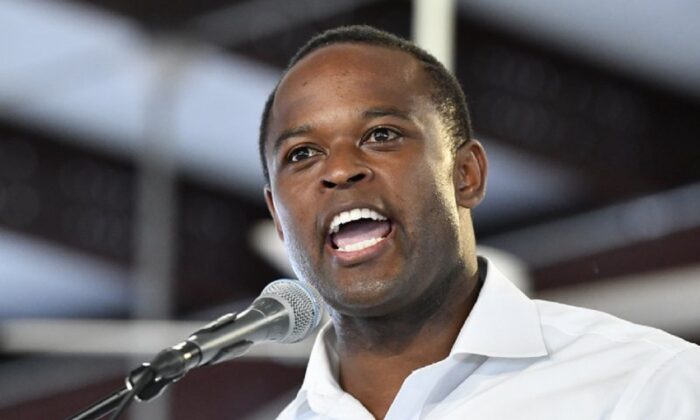 Kentucky’s Republican attorney general should be allowed to defend the state’s abortion law in court after the state’s Democratic governor refused to do so, the Supreme Court heard Oct. 12.

Although it was the court’s first abortion-related case since Justice Amy Coney Barrett’s addition to the bench last year gave its conservative wing a 6–3 majority, Kentucky’s abortion law itself wasn’t at issue at the hearing.

The high court examined only whether Kentucky Attorney General Daniel Cameron should be allowed to intervene in the case on behalf of his state after the trial court invalidated the law and its decision was upheld by an appeals court.

Nonetheless, the case sets the stage for an upcoming legal showdown over abortion. The Supreme Court is scheduled to hear Dobbs v. Jackson Women’s Health Organization, court file 19-1392, on Dec. 1, a challenge to Mississippi’s Gestational Age Act, which allows abortions after 15 weeks’ gestational age only in medical emergencies or for severe fetal abnormality.

The case revolves around Kentucky’s 2018 ban on dilation and evacuation (D&E) abortions on unborn children. After the Supreme Court hearing, Cameron described the procedure as “gruesome,” adding that “it rips the baby apart.”

Then-Gov. Matt Bevin, a Republican, signed House Bill 454, the Human Rights of Unborn Children Act, which stopped D&E abortions after 11 weeks of pregnancy and was subsequently enjoined by federal courts.

Bevin was defeated the next year by Andy Beshear, a Democrat. After Beshear refused to defend the statute in court, Cameron indicated he wanted to do so. The U.S. Court of Appeals for the 6th Circuit turned down Cameron’s request, at which point, he filed his petition asking the Supreme Court to allow him to intervene in the case.

“There isn’t much law for appellate intervention, so what do we rely on?” he asked Kentucky Principal Deputy Solicitor General Matthew F. Kuhn.

Kuhn told the court that “two days after learning that another state official had stopped defending Kentucky’s House Bill 454, the attorney general moved to intervene so that the commonwealth could exhaust all appeals in defense of its law.”

“This court’s caselaw instructs that acting for a state is a distinct capacity. Because everyone agrees that the attorney general did not participate in that capacity in district court, he is not jurisdictionally barred from doing so now,” Kuhn said.

Chief Justice John Roberts told clinic attorney Alexa Kolbi-Molinas that it was important to be clear about who represents Kentucky.

“You don’t want the state speaking through two different voices,” he said.

Kolbi-Molinas, who is a senior staff attorney at the ACLU’s Reproductive Freedom Project, said Cameron waited too long to get involved in the case.

Cameron “agreed to be bound by final judgment and chose not to appeal it,” she said.

“Because he was expressly bound by the judgment, he had a right to appeal, but he had to do so within the 30-day timeframe set by statute. He cannot now avoid his jurisdictional failure by seeking to intervene instead.”

Justice Stephen Breyer seemed to suggest to Kolbi-Molinas that Cameron should at least have his day in court to defend the abortion law.

Two days after the attorney general learned “that nobody’s going to defend it, he comes in and says, let me defend it. And that’s okay under Kentucky law apparently,” Breyer said. “Nobody says it isn’t.”

“And so, if there’s no prejudice to anybody, and I can’t see where there is, why can’t he just come in and defend the law? How does he defend it? One, he asks for rehearing. It’s still timely. And then, two, if they say no, he comes to this court. Now he may lose on both those, and he may lose for the reasons that you say, but I don’t see why he can’t—if Kentucky law allows him to make the argument, why can’t he make the argument?”

Justice Elena Kagan picked up on her colleague’s line of questioning, telling the clinic’s lawyer it’s a “problem” when “there’s nobody left defending the state’s law.”

“And I think what Justice Breyer was saying is: Gosh, that would be an extremely harsh jurisdictional rule or at least a counterintuitive rule if it ended up in a place where nobody was there … to defend Kentucky’s law, even though there are significant parts of Kentucky’s government that still want … its law defended.”

During a teleconference for reporters after the hearing, Cameron said even though his outlook was optimistic, he didn’t “want to put the cart before the horse.”

“We don’t necessarily know how they might ultimately come out on a particular case. But I was heartened by some remarks and some of the comments and questions that were raised by Justice Breyer, but again, they have to go back, and this is just one part of their deliberations.”

Although the Kentucky case is “focused on seemingly arcane procedural questions, the real goal is to use any and all means to ban abortion,” Nash told McClatchy.