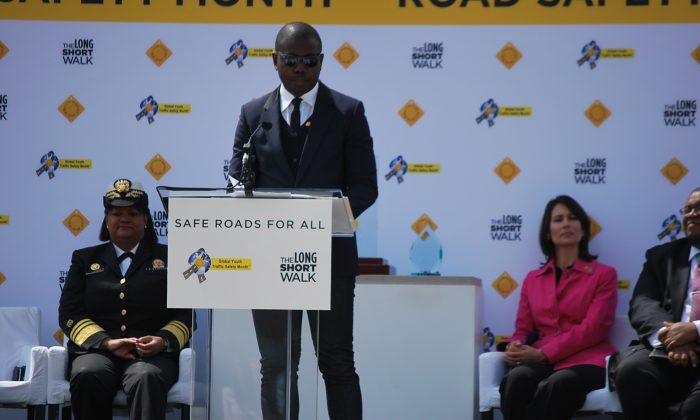 Kweku Mandela speaks of youth killed in car crashes in the developing world at the kick off rally for the Global Traffic Safety Month in Washington, D.C. on May 8, 2013. (Ron Dory/Epoch Times)
US

The overcast morning gave way to a bright afternoon as U.S. Department of Transportation Secretary Ray La Hood addressed NOYS members before the steps of the Jefferson Memorial on May 8. Sporting a white pair of Rayban Wairfairer-style sunglasses, La Hood did his best to maintain a lighthearted tone for serious subject matter.

La Hood encouraged young drivers to put their cell phones in the glove compartment. “Whatever it is can wait,” he said. “There is no phone call or text message that is so important that it can’t wait until you get to your destination.”

The Zenani Mandela Campaign contributes to the United Nations Decade of Action for Road Safety by advocating for better levels of protection for children in developing countries.

“Road safety should be recognized as a human right,” Mandela said. “As we approach 2014, we need sustainable goals to put road safety at the forefront of what we do and what we debate daily in our lives.”

“It’s no secret that road crashes are the number one killer of young people around the world. It might surprise some of you that the majority of those crashes happen in developing countries like South Africa.”

The United States also contributes a growing share to the global traffic accident death toll. According to recent statistics, U.S. traffic-related fatalities are on the rise, and the annual peak for accidents is approaching fast.

One audience member, Sierra Sigmore, said the message hit close to home. A high school student from Maryland, Sigmore admitted to being a little nervous about getting her driver’s license once she learned that more youth die in fatal car crashes during summer months.

Statistics released last week by the National Highway Transportation Safety Administration (NHTSA) show a 5 percent increase in fatalities from 2011 to 2012. The recent rise marks a reverse in trend from several years of annual declines. An additional 1,700 people were killed in traffic crashes in 2012 than in the previous year according to NHTSA.

Distraction among young drivers contributed to the increase. Motorists between the ages of 15 and 20 comprised 10 percent of the fatal crashes in 2011 according to the NHTSA.

The NHTSA held an open house on May 8 to engage young people in a discussion, and to identify solutions to rising traffic accidents. Local youth gathered at the National Transportation Safety Board (NTSB) conference center, while students from Michigan, New Jersey, Texas, and Illinois participated via satellite.

“Student’s said that they like hands on [learning, and] liked being involved, whether they were taking a leadership position in their community regarding peer to peer communication or whether they were participating in a seat belt check point or a distracted driving check point,” said Deborah Hersman, NTSB Chairman in a telephone interview.

The Ford DSFL program has been running for 10 years in the United States and six years in Asia with programs in Mainland China, India, Indonesia, and South Africa. Roughly 13,500 drivers were trained last year and more than 63,000 people have been trained since the programs began internationally according to Ford DSFL.

Providing guidance and supporting youth and training them to practice safe driving habits is a task not only taken up by non-profit and for-profit organizations, as media also play a role in disseminating the message. To recognize the outreach work of a national media outlet, NOYS presented Teen Vogue magazine with the national media outreach leader award.

Following the Washington D.C. event, youth and road safety advocates participated in the Long Short Walk N’ Roll for Road Safety in support of GYTSM and The U.N. Global Road Safety Week. Participants walked from the Jefferson Memorial to the Smithsonian Castle. The walk was an exercise in many senses of the word: an exercise for the body, an exercise to remember those killed in motor vehicle accidents, and an exercise in each individual free will.

South Africa Ambassador Ebrahim Rasool referenced the spirit of Ubuntu—a South African ethic that describes human beings as interconnected. He encouraged the audience to reflect on balancing the freedoms that Nelson Mandela fought for with the virtues of personal responsibility.