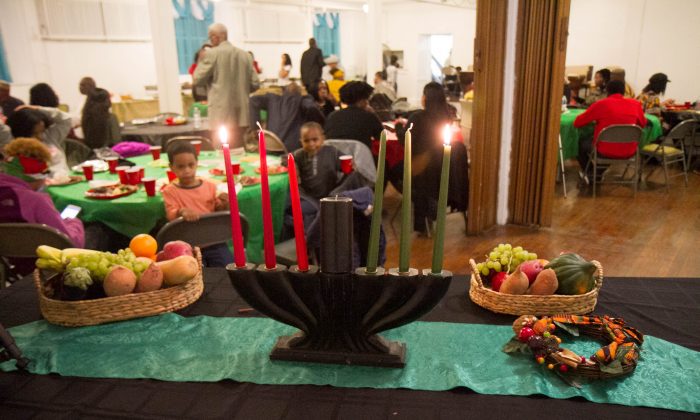 A kinara, which means candle holder in Swahili, at the back of a Kwanzaa celebration in Newburgh on Dec. 27, 2015. A Kinari holds seven candles, one for each day of Kwanzaa, with three red, three green and one black candle in the colors of Kwanzaa. (Holly Kellum/Epoch Times)
New York

Kwanzaa Ceremony in Newburgh a Celebration of Values

CITY OF NEWBURGH— Unity, self-determination, collective work and responsibility, cooperative economics, purpose, creativity and faith—these are the principles highlighted on the pan-African holiday Kwanzaa. On Dec. 27, it was kujichagulia (koo-gee-cha-goo-lee-yah), Sawhili for self-determination.

“The ability to define for yourself who you are and what you are to be about on the planet,” explained Tiombe Tallie-Carter who is on the executive council of the Black History Committee of the Hudson Valley.The committee has been hosting a Kwanzaa ceremony for the last several years and this year brought together some 40 people at the Mt. Calvary Fire Baptized Church in the City of Newburgh for a night of music, remembrance, art, and community.

Percussionist Kazi Oliver got the audience moving to his African drumming, and saxophonist Babatunde Woodard-James got people humming along to ‘When the Saints Go Marching In.” Everyone joined in for the Negro National Anthem.

The committee’s resident artist, Bob Cash, introduced his work in progress called Strange Fruit, a collection of collages named after a song by Abel Meeropol that deals with American racism and lynching in particular. His artwork was about remembering and acknowledging the history of African-Americans in the United States, he said.

So many generations in this performance! #kwanzaa #newburgh #OCNY pic.twitter.com/e78PBaFUeo

“In the spirit of Kwanzaa, it is our responsibility to connect to our past and learn lessons from our past,” said Tallie-Carter after Cash’s presentation.

Nia D. Greene Lindo, a resident of the Town of Newburgh, presented her game KWANZAA-O-RAMA 365 days, which she created to bring the values of Kwanzaa into everyday life. She bemoaned the lack of values in youth today, as well as the absence of the “village” that helped raise her.

“We need to adopt the Kwanzaa principles as our goals for trying to bring our community back together and reconnect so that we can restore the village,” Greene Lindo said. “Our children need the village.”

She started selling the board game this summer and estimates she has sold about 100 so far on Amazon.

Kwanzaa was started in 1966 by an academic, Maulana Karenga, to celebrate and reconnect African-Americans with their heritage, and the holiday is now celebrated around the world. It is a seven-day celebration, one for each day of the seven Kwanzaa principles and falls between Christmas and New Year’s Day.

The Black History Committee has been holding a public celebration in Newburgh, but hopes to expand it outside the city, said the committee’s President Sadie Tallie. She is working on getting six other municipalities, such as Poughkeepsie, Beacon, Kingston, Middletown and Goshen to host public celebrations for next year.

“We do it on Sunday, but they may do it on a day of the week where we can go support,”she said. “So we’re going to work on doing that.”