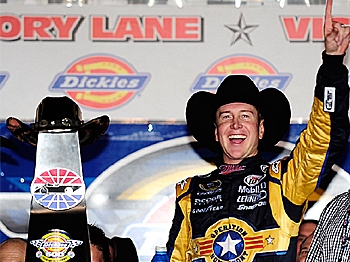 By James Fish
Print
After points leader Jimmie Johnson was caught up in a crash on lap three, bothers Kurt and Kyle Busch battled for the win at the NASCAR Dickies 500 at Texas Motor Speedway on Sunday, November 8. Kyle came up short on fuel and Kurt Busch brought his Miller Lite-sponsored Penske Dodge across the line for his first win at Texas. The victory moved Kurt Busch into fourth place in the Chase, 171 points down.

Kyle Busch had already won the Camping World truck race on Friday and the Nationwide race on Saturday. Had he won Sunday’s Sprint Cup race he would have been the first driver ever to win the NASCAR Trifecta.

“That was the first true time that Kyle and I raced each other hard for a victory like this,” Kurt Busch said. “For us to come away and knock him off this sweep he was trying to go for, it’s bittersweet. I was rooting for him, but at the same time this is for us.”

Kurt and Kyle Busch battled for the lead from lap thirteen, with Kyle generally proving faster. But Kyle also had less discipline; in the closing laps, Kurt Busch conserved just enough fuel to take the win, running out on his victory lap. Kyle Busch ran out three laps from the end, costing him the win.

Kyle Busch’s crew chief gambled on there being a late-race yellow, but for the first time in a very long time, the race ran clean and green to the end. Kyle had to limp into the pits on fumes, and then had trouble restarting, dropping from first to eleventh place in the final three laps.

Chase leader Jimmie Johnson qualified twelfth, putting him back in the pack where the danger of collision tends to be higher. So it was: on lap three, David Reutimann gave Sam Hornish the tiniest of taps coming out of Turn Two. Hornish, whose car was dangerously loose all day, spun into Johnson, breaking his back end loose.

Johnson fought hard to save it but halfway down the straight he nosed into the outside wall, which bounced him back across the track. Johnson slammed into Hornish and then spun into the inside wall, hitting it just past the end of the SAFER barrier. The collision of car and concrete destroyed the back end of the car.

“I was in the wrong place at the wrong time,” Johnson said after the race. “I was just on the outside of him [Sam Hornish] when he lost it. He collected me, I tried to save it, bounced off a couple things, and hit the inside wall hard. Just one of those deals. I had been saying all along that this thing isn’t over. Thankfully we had a big points lead. We still have a nice points lead going into Phoenix, and we’ll just dust ourselves off and go again next week.”

Crews from all three Hendrick Motorsports cars pitched in to get Johnson back on the track. They had to rebuild the rear end, the front suspension, the cooling system and most of the bodywork. Johnson rejoined more than an hour later, 118 laps down. Johnson finished as the last car running, earning 49 points.

The day wasn’t a total loss for the 48 car. Jimmie Johnson’s closest competition, Mark Martin and Jeff Gordon, Jeff Gordon, could have cut the lead by much more.

Jeff Gordon put the blame on his own shoulders.

“More than anything it’s a missed opportunity, I’m just terrible at this place. I don’t know what it is. It just challenged us all day to day. We seemed to be the best at the beginning of the race, so we made some adjustments trying to make it better based on what I was telling them, and we went backwards from there.”

Mark Martin, right behind Johnson in the Chase, finished fourth. Jeff Gordon, third in points, started from the pole and led the first thirteen laps but never got the car running right. After pitting on lap 323, he finished thirteenth, benefiting from the retirements ahead of him. He is now 112 points behind Johnson.

Most of the leaders had to pit for fuel in the final 20 laps, and a few of the other front-runners gambled and lost. Dale Earnhardt, who had run near the front most of the day, couldn’t fire up the car after stopping for fuel with seven laps to go, dropping from fourth to 25th place.

David Reutimann and Marcus Ambrose also ran dry, Ambrose making it all the way to the final lap. Reutimann dropped from third to sixteenth, Ambrose from fifth to fifteenth.

Before Talladega, many felt the Chase was over, and Jimmie Johnson had a lock on his fourth Championship. After Texas, Mark Martin made it quite clear that he didn’t feel that was the case.

“It’s not over yet. I am still kind of baffled at why everybody is so preoccupied with first and second. The top six spots are being raced for like a dogfight. I‘ve got two champions, that knocked me out of championships, breathing down my neck. The race is still on for all of us.”

Martin cut Jimmie Johnson’s lead by more than half, from 184 to 73 points, which Martin thought his team could easily make up in the final two races.

“We can go head-to-head with them [Jimmie Johnson], no doubt about it. Phoenix, we led the most laps and won last time there. And we have no reason to think we can’t run strong at Homestead. There could still be swings in the points. There’s two races left, you never know what’s going to happen.”

Martin ran near the front for the second half of the race and finished fourth. He wisely pitted for fuel only—no tires—on lap 317 and got back out in seven seconds, while others tried to stretch their fuel loads, hoping for a caution.

Martin said his crew saved the race for him. “We were junk yesterday, fair at the start of the race. Halfway through the race they hit on something, and it was a top- five car, and we clawed our way back into the top five with it.”

The Chase heads to Arizona next week, for the Checker O'Reilly Auto Parts 500 at Phoenix International Raceway on November 15. Phoenix is a flat, one-mile oval which usually provides a lot of bumping and banging. Mark Martin won there in April, his first victory in four years, while Jimmie Johnson finished fourth. A similar result next week could cut Jimmie Johnson’s lead in half yet again, depending on bonus points.