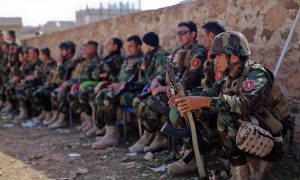 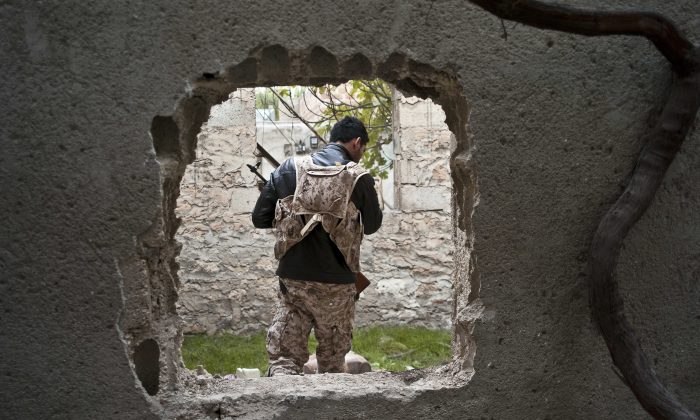 In this Nov. 1, 2014 photo, a fighter from the coalition against the Islamic State group is seen through a hole cut in a wall to create shortcuts in the battlefield in Kobani, Syria. In a surprising display of resilience, the Kurdish fighters have held out against the more experienced jihadists more than two months into the Islamic State group militants' offensive on the frontier town, hanging on to their territory against all expectations.(AP Photo/Jake Simkin)
Middle East

BEIRUT—Kurdish fighters advanced on the Islamic State extremist group in Iraq and Syria on Saturday, pushing into the contested, refugee-packed Sinjar mountains and gaining ground in the embattled Syrian border town of Kobani after heavy clashes, Kurdish officials and an activist group said.

In Syria, Kurdish Democratic Union Party spokesman Nawaf Khalil said Kurdish fighters advanced in six neighborhoods and have besieged the IS-held cultural center east of Kobani. He added that Kurdish fighters captured the Yarmouk school, southeast of Kobani where eight bodies of IS fighters were found.

The IS group began its Kobani offensive in mid-September, capturing parts of the town as well as dozens of nearby villages. Hundreds of fighters on both sides have been killed since. Kurdish forces have gradually pushed the extremist group back in recent weeks with the help of U.S.-led coalition airstrikes.

Iraq’s Kurdistan Region Security Council said peshmerga fighters launched a new offensive on Saturday toward Mount Sinjar and were able to capture the nearby area of Mushrefa.

The statement said that early Saturday, 32 truckloads of food, water and other aid departed from the northern Iraqi city of Erbil to Mount Sinjar through the “corridor established by the courageous Peshmerga forces.”

Warplanes from the U.S.-led coalition circled overhead as peshmerga troops returning from the front said the city was full of roadside bombs and snipers. The peshmerga had set up a base overlooking the city on the summit of Mount Sinjar, which included a makeshift hospital, they added.

Spokesman Jabbar Yawar said Peshmerga fighters were fighting their way into Sinjar and nearby areas in coordination with allied air support.

The Islamic State group captured almost a third of Iraq and Syria earlier this year, plunging the region into deep crisis.

In early August, the militants captured Iraqi towns of Sinjar and Zumar, prompting tens of thousands of people from the Yazidi minority to flee to the mountain, where they became trapped. Many were eventually airlifted by a passageway through Syria back into Iraq, where they found refuge in Iraq’s northern Kurdish semi-autonomous region.

From The Associated Press. Dalton Bennett contributed to this report.