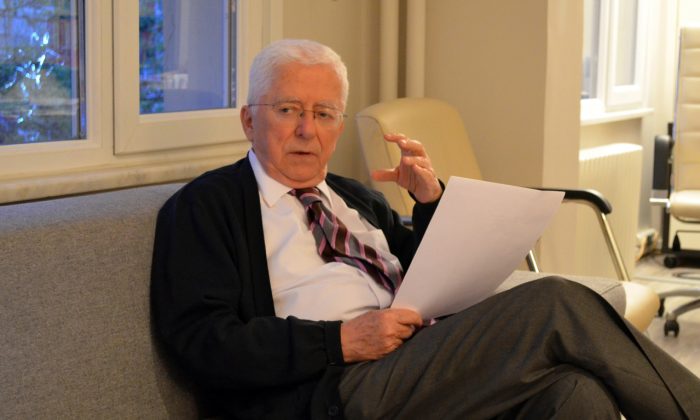 Businessman and former politician Tarhan Erdem, who heads the Council of the Wise in Western Anatolia, explained his thoughts about the Kurdish peace process. (Tiejun Wang/The Epoch Times)
Middle East

ISTANBUL—The Turkish government is negotiating a peace agreement it hopes will end the decades long problems of terrorism and the plight of the Kurdish people.

To communicate with the public, it has created an independent Wise Council—a group of 63 people who will take on protracted and super-heated issues.

Some see the council as a cunningly placed political shield between the government and public opinion on a highly charged issue, and question its independence. Others feel it is an important step on the road to peace.

PKK (Turkish Worker’s Party), listed as a terrorist organization by U.N. and NATO, has agreed on disarmament and withdrawal from Turkey in return for rights for the Kurdish people.

Kurds make up 16.6 percent of the Turkish population according to data from Konda Research, the majority of which is eligible for voting.

The peace process has triggered controversies and split public opinion. Some think that peace negotiations will end up with separation of the Kurds.

The government has turned its efforts to building public support for the peace process—hence the creation of the Wise Council.

“Turkey has been struggling with same thinking since 1923 and there has been no respect for human rights. Therefore Southeast Turkey has remained underdeveloped. Kurdish people’s quality of life and income are relatively poor. They don’t have the same opportunities,” said Tarhan Erdem, head of the West Anatolia Wise Council. Erdem is an ex-politician from the CHP (Republican People’s Party).

“The government has not given any directions to the council on what to say to the public. Knowing we have diverse backgrounds and beliefs, the government has indeed taken a risk [by appointing a council]. I have been criticizing the government about the presidential system” said Erdem.

But the main opposition leader, Kemal Kilicdaroglu is doubtful about the independence of the Wise. “Those who make propaganda of government cannot be wise,” he said in the General Meeting of his party. “A person who leases his wisdom cannot be named wise.”

Opposition parties have boycotted the government for negotiating with PKK and Abdullah Ocalan and refused any cooperation between parties.

The cynicism extends to some of the public too, but the members of the Wise Council are adamant of their independence and value in the peace process.

“The Wise People are so colorful and different-minded,” said academician and member of the Wise Council Deniz Ulke Aribogan on NTV citing the diversity of group, which includes famous artists, businessmen, academics, and journalists living in Turkey with various backgrounds, culture, ethnicity, and belief.

The Wise Council is divided into seven groups with one president heading nine members responsible for each region. Each group visits cities in their assigned region.

“We are not part of the political decision-making process. We are only working as peace envoys. Therefore we cannot predict the end result of the peace process. However we see great public support for peace in the cities we visit,” said Can Paker head of the Wise Council in the Eastern Anatolia region.

“We will spend four days covering two cities per week in Eastern Anatolia. We will speak with the public and share our findings with government. All communication and work will be transparent,” said Paker.

In some cities of Turkey, the wise people have been subjected to protests and criticisms. MHP (Nationalist Movement Party) leader Devlet Bahceli has also condemned government and the Council of the Wise. “The Turkish nation has been driven into a heavy depression and the trap of separation. Sixty-three dark faces will enthusiastically explain to the public how Turkey will be divided, how the Turkish nation should be divided into ethnic camps, in what way PKK will be legitimized, and how the national government system will be overthrown” said Bahceli in a press release on April 5.

PKK deputy leader Murat Karayilan recently announced that they will start withdrawing from Turkey on May 8.

“If the peace process fails and one party walks away, I think it will be a disaster,” says Erdem.