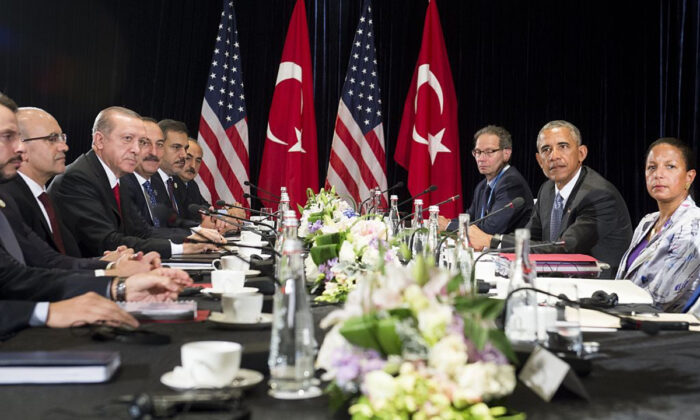 The then US President Barack Obama (R) and Turkish President Recep Tayyip Erdogan (3rd-L) hold a meeting on the sidelines of the G20 Summit in Hangzhou on Sept. 4, 2016. (Saul Loeb/AFP/Getty Images)
International

Kurdish-Led Forces Were Used as Wedge Between US and Turkey, Says Insider

The alliance between the United States and Kurdish-led forces set up in 2014 to take on ISIS in Syria has damaged the United States’ relationship with Turkey in a region threatened by Iranian and Russian hegemony, claims an insider to the Turkish leadership.

Erbil Gunasti, who formerly worked under Turkish President Recep Tayyip Erdogan and is the author of an upcoming book, “GameChanger,” says that President Donald Trump distanced himself from the Kurdish People’s Protection Unit (YPG) in a bid to win over Erdogan.

On Oct. 9, Erdogan announced an offensive named Operation Peace Spring against the Syrian Democratic Forces (SDF) and ISIS terrorists in northeastern Syria. The SDF is an alliance in the Syrian Civil War that mostly consists of Kurdish, Arab, and Assyrian forces and is led by the YPG.

Turkey considers the YPG an offshoot of the Kurdistan Worker’s Party (PKK), which it designates as a terrorist group. The U.S. Department of State also designates the PKK as a Foreign Terrorist Organization (FTO) and as a Specially Designated Global Terrorist, according to a release by the U.S. Embassy and Consulates in Turkey.

Immediately after a presidential cabinet meeting on Oct. 16, the Turkish presidential spokesperson, İbrahim Kalın, told reporters in a press conference that the PKK, with its branches in Syria and Iraq, is a proxy organization and “is a pawn used by international powers.”

“It is probably one of the greatest scandals in near political history that this organization, under the guise of fighting DAESH [ISIS], has been backed, promoted, treated as if it were a state actor,” said Kalın.

The American partnership with the YPG to fight ISIS was started by the Obama administration in 2014. Gunasti, who emphasizes in his upcoming book the importance of a cooperative relationship between Trump and Erdogan, told The Epoch Times in an email that the “U.S. should not have aligned itself with a terrorist organization in the first place.”

“One, the U.S. could have had soldiers from any one of the other 192 countries contributing to the U.S. troops to confront ISIS in Syria,” he said. “Instead, the U.S. decided to ally itself with a non-state actor. That is a weakness for the sole superpower of the world since 1991. A superpower must act like a superpower in leadership over other nation-states. Otherwise, the leadership status goes into shreds.”

President Donald Trump on Oct. 7 pulled U.S. forces out of northeast Syria, which he was widely condemned for, but Gunasti believes what Trump did was right. He questioned why the soldiers were put there in the first place.

He said that the American decision to place soldiers in northeast Syria was driven by internal politics in the United States and not an actual requirement on the ground.

“President Trump knows very well what happens when the U.S. deploys a few hundred troops to a no-man’s land. They get slaughtered or massacred,” he said. “President Obama is the one that deployed 200 U.S. troops to Syria, not President Trump.”

According to Gunasti, Obama did this to weaken Trump after he came to office, “meaning forcing the hand of the incoming President Trump either to pull those 200 troops out right away from Syria or to bolster their numbers with more troop deployment.

“The goal was to weaken President Trump the first day he came to the office with a Syrian ‘hit job’ so to speak,” he said.

An Atlantic Council report released almost two months before Operation Peace Spring describes the “political and military dynamics in Syria playing at two different levels, with the non-state, Kurdish majority [SDF] engaged in a complex set of negotiations with state-level actors, including the Syrian regime, Russia, the United States, and Turkey.

“In parallel, these state actors are involved with different—and often competing—local actors, each with their own demands for post-conflict governance in Syria.”

Gunasti said that if the United States had chosen Turkey instead of the SDF to fight ISIS, the situation in Syria would have been completely different.

“If the U.S. had chosen instead Turkey as its partner in Syria, today neither Russia nor Iran would be in Syria,” Gunasti said. “Nor would Bashar al-Assad’s regime be there. In 2012, then-Prime Minister Erdogan made an offer to President Obama.

“Turkey was to go in and take out the Assad regime by force with logistic support from the U.S. President Obama made a mistake and refused it. As a result, today, the U.S. is kicked out of Syria.”

He said it’s not that Trump withdrew forces from northeast Syria, but that the United States was forced to leave Syria because of what has transpired since 2012.

Gunasti said the situation has worked out favorably for Russia and Iran.

“Instead, Russia is in Syria for the next 50 years, so long as Russia keeps a growing relationship with Turkey for the foreseeable future. Iran, too, will remain in Syria in some form or another, filling the vacuum left behind by the Western powers,” he said.

From YPG to Turkey

Gunasti said that by withdrawing U.S. forces and by distancing himself from the YPG, Trump is making attempts to improve the U.S.-Turkey relationship.

“President Obama simply lost Turkey … President Trump is trying to win it back with the Syrian pullout and other measures in place, but has not announced publicly yet,” said Gunasti who argues in his book, GameChanger, that “Muslim migration will soon change Western civilization as we know it—unless Donald Trump and Recep Tayyip Erdogan work together.”

He mentioned that Turkey has given enough evidence to Trump about the YPG’s terrorist activities.

Kalın reiterated the same in the press conference on Wednesday. “Mr. President has held numerous talks with the U.S. President and European leaders and has told them that there will be no peace and stability in here as long as these aids are delivered to these terrorist elements. He has clearly pointed out that it is an existential threat for our national security.”

Gunatsi said that while Trump doesn’t want to make enemies in the region, he has realized that the YPG should be considered a terrorist organization.

“As for President Trump distancing itself from the enmity of YPG, he came to the realization by evidence and other reasons … that YPG has to be considered now officially a terrorist organization,” he said. “That is also another way President Trump is coming to terms with President Erdogan.”

Gunatsi said that “President Trump had to reach out to President Erdogan, and he did. To do so he had to recognize the YPG like Turkey has, as an extension of the PKK in Syria, as a terrorist organization.”