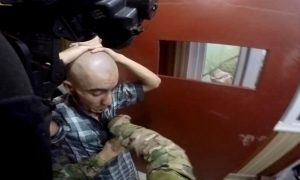 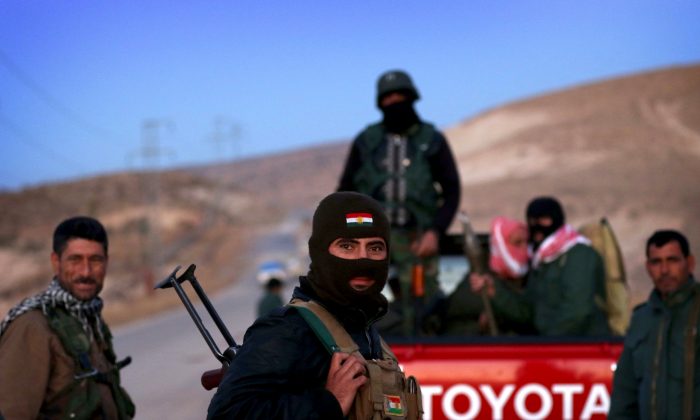 Iraqi Kurdish forces take part in an operation backed by U.S.-led airstrikes in the northern Iraqi town of Sinjar, Mosul Province, on Nov. 12, 2015, to retake the town from the Islamic State and cut a key supply line to Syria. (Safin Hamed/AFP/Getty Images)
Middle East

SINJAR, Iraq— Dealing a double blow Friday to the Islamic State group, Iraqi Kurdish forces pushed into the strategic town of Sinjar in northern Iraq, and a coalition of Arab, Christian and Kurdish rebel factions recaptured another town from the militants across the border in Syria.

The Kurdish forces raised their flag in the center of Sinjar, and a top official said it was liberated, although U.S. and Kurdish military officials urged caution in declaring victory in the major offensive.

The fighters encountered little resistance, at least initially, suggesting that many of the IS militants may have pulled back in anticipation of the advance. It was also possible that they could be biding their time before striking back.

The offensive to retake Sinjar was launched Thursday by the Kurdish militia fighters known as the peshmerga forces, and they succeeded in cutting a key nearby highway and retaking more than 150 square kilometers (about 60 square miles) of territory from the Islamic State group. Airstrikes by a U.S.-led coalition supported the offensive, dubbed Operation Free Sinjar.

The Kurdistan Region Security Council said 28 villages were retaken from the Islamic State and “more than 300 terrorists were killed by Peshmerga forces and Coalition warplanes” in the course of the two-day operation.

By cutting the road, Iraqi and coalition officials said the extremists will struggle to maintain a flow of supplies to Iraq’s second-largest city, Mosul, which has been under militant control since June 2014. Without direct access on Highway 47, the militants would have to travel off-road for several hours to travel between their strongholds in Syria and Iraq.

Sinjar has been under the control of the self-described Islamic State group for more than a year. It was overrun by the extremists as they swept across Syria and Iraq in August 2014, leading to the killing, enslavement and flight of thousands from the Yazidi religious minority.

“We promised, we have liberated Sinjar,” Massoud Barzani, the president of the semi-autonomous Kurdish region, told fighters in Sinjar. “It’s time for the Yazidi girls to raise their heads up. Revenge has been taken for them.”

Across the border in Syria, a rebel coalition known as the Democratic Forces of Syria seized the town of Hol in northern Hassakeh province. The U.S.-backed offensive to retake IS-held areas in the southern parts of Hassakeh is coinciding with the push to recapture Sinjar.

Redur Khalil, the spokesman for the main Kurdish faction in Syria known as the YPG, announced that the coalition took Hol.

The Britain-based Syrian Observatory for Human Rights also reported the Democratic Forces of Syria had reached Hol. It said the Syrian fighters were backed by intense U.S.-led airstrikes that killed dozens of militants. Others fled, leaving their weapons and ammunition behind.

It was the biggest victory for the Syrian coalition, which was formed in mid-October. The push to liberate southern Hassakeh province from IS was announced shortly after that. Hol, previously a major stronghold for the Islamic State group before it captured Raqqa, is considered one of the most oil-rich areas held by the militants and is located along the same highway captured by Kurdish fighters in Sinjar.

A senior Kurdish defense official, Nasser Haj Mansour, told The Associated Press earlier that coalition fighters had reached the outskirts of Hol. He said IS militants burned houses as they fled the town, while others used the few civilians left as human shields.

The recapture of Sinjar and Hol coincided with other key developments elsewhere involving the Islamic State group:

— A U.S. drone strike targeted a vehicle in Syria believed to be carrying the IS militant known as “Jihadi John,” U.S. officials said, but it was still unclear whether the strike killed the masked man who appeared in videos depicting the killings of Western hostages. Mohammed Emwazi, a Kuwaiti-born British citizen, was the target of a Hellfire missile from the drone in Raqqa, Pentagon spokesman Peter Cook said in a statement. Officials were assessing the results of the strike, he said.

— The Islamic State group claimed responsibility for two bombings Friday in Baghdad that killed 26 people. At least 21 people died when a suicide bomber struck a memorial service for a Shiite militia fighter who as killed battling IS in the southwestern suburb of Hay al-Amal; and five people died when a roadside bomb exploded at a Shiite shrine in Sadr City, officials said. They spoke on condition of anonymity because they were not authorized to talk to reporters.

— Lebanon mourned 43 victims of two suicide bombings in a neighborhood south of Beirut that were claimed by the Islamic State group, which has not had a recognized affiliate in the country. Thursday’s attack — one of the deadliest in years in Lebanon — struck a stronghold of the militant Shiite Hezbollah group, and Prime Minister Tammam Salam chaired a security meeting on the bombings.