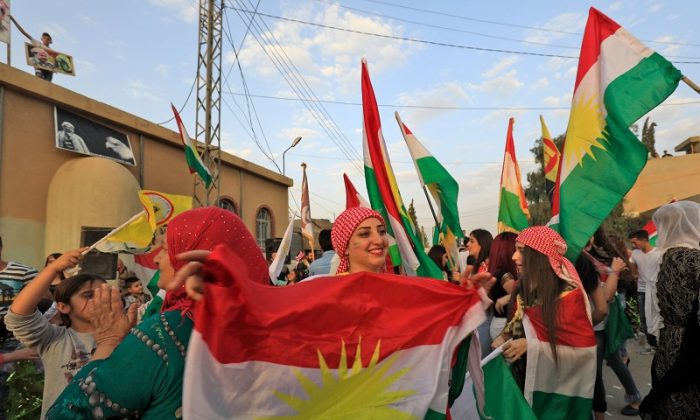 Syrian Kurds dance with the Kurdish flag as they celebrate in the northeastern Syrian city of Qamishli on Sept. 25, 2017, in support of the independence referendum in Iraq's autonomous northern Kurdish region. (DELIL SOULEIMAN/AFP/Getty Images)
Viewpoints

This time will the Kurds find a way?

Their modern aspirations for statehood have been disrespected (ignored) for over a century. Implicit promises for support of independence from Western powers have proved a chimera.

Moreover, bilateral Western relations with these states are deemed far more important than supporting chaotic Kurdish efforts for independence. This isn’t malign indifference, but rather realpolitik buttressed by the further problem that some Turkish Kurds are designated as terrorists.

The Kurds Have Made the Case for Kurdistan

Nevertheless, Kurdish numbers are not trivial; estimates range from 30 to 45 million, with an additional diaspora of 1.5 million, half of whom are in Germany. At 45 million, a “Kurdistan” would be larger than Ukraine and Argentina and only slightly smaller than Spain.

And Kurdish populations have not been placid; repression has been met with resistance.

Thus, there has been a protracted exercise of national suppression and rebellion by Kurds against the heavy-handed (and when have the states in which they reside been “light-handed”?) which has been bloody and brutal on all sides. Relations with their Kurdish minorities have been characterized by attempts to force them into the procrustean beds of the language, writing, and culture of the countries in which they are living with Kurdish culture suppressed or at best permitted limited secondary expression.

Of special difficulty has been the Kurds relations with Ankara. At different points, they have had tenuous but peaceful relations. At others there has been outright civil war. Most recently, however, following a stretch of cold peace, the ever-fragile construct has deteriorated with Ankara resuming attacks on the Kurds, coincidental with President Erdogan’s efforts to bring all Turkey under his political domination. Attacking the Kurds is always a popular nationalist rallying cry for Turks.

More proximate, however, has been the activity of Iraqi Kurds. Approximately 17 percent of Iraq’s population, they have a majority in the three northern provinces. Repeatedly, they have sought to control oil rich areas around Kirkuk. Iraqi forces under Saddam Hussein directed comprehensive repression against the Kurds, with major massacres accompanied by deportations. Needless to say, the Kurds welcomed the Allied Coalition of Desert Storm liberating Kuwait and, subsequently, the 2003 invasion of Iraq that definitively replaced Saddam.

Following the liberation of Iraq, the Kurds maneuvered with the Baghdad government for greater autonomy and control over local economic resources. This shadow boxing persisted until the stunning rise of the Islamic terrorist organization Da’esh/ISIS/ISIL in 2014 that swept aside Iraqi forces, virtually annihilating them, and seizing control of vast stretches of northern Iraq including many sections of Iraq Kurdistan. For months it appeared as if nothing could counter Da’esh.

But for the Iraqi Kurds, Da’esh control promised annihilation. If Saddam had been systemically brutal and individually vicious, Da’esh leaders evidenced a maniacal fury against the Kurds that promised genocide. Faced with death (and no realistic prospect of survival even with surrender), the Kurds fought back desperately. And, increasingly, albeit semi-secretly with assistance from the United States, they prevailed. Quickly, it became apparent that only the Kurdish forces (“Peshmerga”—“one who faces death”) were combat effective against Da’esh.

Indeed, the Peshmerga, although equipped primarily with light infantry weapons, played a major role in the liberation of Mosul, the primary Da’esh urban center, and were vital military partners against Da’esh elsewhere.

Building on such military triumphs, the Kurds held a (nonbinding) independence referendum on Sept. 25 that passed overwhelmingly with 77 percent turnout and 90 percent plus voting “yes”; it threw down the gauntlet against the Iraqi government—which reacted with furious anger. All standard nay-sayers, e.g., United Nations, Turkey, Iran, United States, and (obviously) central Iraqi government) opposed the referendum. Nevertheless, the Kurds hold the upper hand.

Kurdish leader Massoud Barzani said he wants to negotiate with Iraqi Prime Minister Haider al-Abadi on a peaceful transition to secession but vowed “We will never go back to the failed partnership” with Baghdad.

Military suppression efforts would be feckless, given Kurdish combat effectiveness.

And while independence remains a long shot, it is a better bet than ever before.