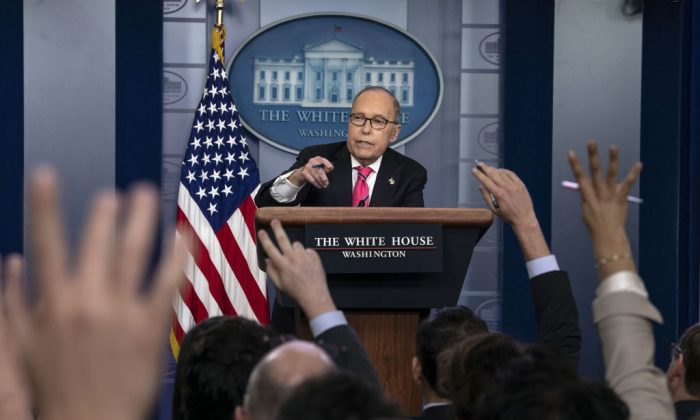 Director of the National Economic Council Larry Kudlow speaks at a press briefing at the White House in Washington on Nov. 27, 2018. (NICHOLAS KAMM/AFP/Getty Images)
Trump Administration

WASHINGTON—President Donald Trump is “positive” about his upcoming meeting with Chinese leader Xi Jinping and is even open to making a trade deal with Xi if certain conditions are met, according to National Economic Council Director Larry Kudlow.

Trump plans to sit down with Xi over dinner at the Group of 20 (G-20) meeting in Buenos Aires, Argentina, where world leaders will convene for a two-day meeting this weekend.

“There is a good possibility that a deal can be made, and he is open to that,” Kudlow told reporters on Nov. 27.

But as Trump has made clear before, a deal will not come to fruition without China mending its trade violations, and that is where Kudlow said, “we’ll see.”

Theft of intellectual property, forced technology transfers, tariff and non-tariff barriers, and issues of ownership will all have to be resolved before the United States will enter a deal.

If no deal is signed, Trump says he’s OK with the status quo. The alternative is to put tariffs on another $267 billion in Chinese goods should a trade deal with China not succeed, which could hurt consumers with price hikes, but would also put billions of dollars into the U.S. Treasury.

In any case, unless a deal is suddenly reached, the United States plans to increase tariffs from 10 percent to 25 percent on some $200 billion worth of Chinese goods starting Jan. 1. Asked whether he would delay the hike if Xi asked, Trump told The Wall Street Journal on Nov. 26 that it “would be highly unlikely.”

“Why shouldn’t China rip off the United States if we have people allowing that to happen?” he said. “They did whatever they wanted, and people let them do that.”

Trump campaigned on reducing the trade imbalance with China, which totaled $335.4 billion last year. He also complained during the campaign about China’s asymmetrical trade warfare that has been estimated to cost the United States between $180 billion and $540 billion annually.

While Kudlow said that Trump was the one who reached out to Xi for a meeting at the G-20, he sees the United States as negotiating from a position of strength relative to China, whose economic growth has slowed substantially over the past several years.

Official Chinese statistics are often inflated, but even those show a slowing of the economy. Economists from Beijing’s Renmin University predicted that the country’s growth will hit 6.6 percent this year and slow to 6.3 percent in 2019.

“I’m not here to critique or second-guess the Chinese economy, but most observers believe China to be in a slump, whereas the United States is in a very strong, solid position going into this summit,” Kudlow said.

Trump’s goal at the G-20, Kudlow said, was to promote fair economic competition and free, fair, and reciprocal trade.

Trump also is scheduled to meet with the leaders of Japan, India, Turkey, Russia, and South Korea.

“We’re gonna use this as an opportunity to talk about our measures of tax cuts and deregulations and reskilling and job training and so forth that have generated significant economic growth and prosperity [in the United States],” Kudlow said. “That includes women’s economic empowerment.”

He added that there will also be discussion around the United States emerging as “the dominant energy power in the world today.”

One notable leader Trump is not planning to meet with is Saudi Arabia’s Crown Prince Mohammed bin Salman. Trump has faced calls to take a harder line on Saudi Arabia, and the prince in particular, after a Saudi journalist and U.S. resident Jamal Khashoggi was killed by Saudi nationals at a consulate in Turkey in October.

Press Secretary Sarah Huckabee Sanders said Trump’s schedule for the summit is “is pretty packed,” but she “wouldn’t say that we’ve ruled out any interaction.”