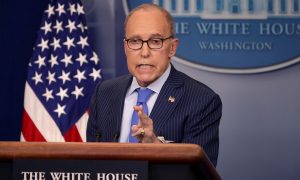 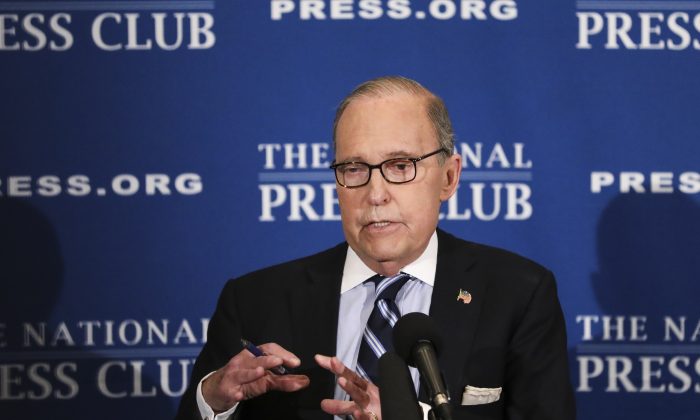 “Look, I am an ex-Democrat,” Kudlow said. “Actually, I have worked for two presidents who were ex-Democrats, Ronald Reagan and Donald Trump.”

“I will say this, socialism is a loser. I don’t want us to forget the lessons of the past.”

“They sap our morale, they reduce our freedom, they tend to turn into really tyrannical political situations.”

Kudlow’s remarks came amid rising support for policies among members of the Democratic Party such as Medicare for All and the Green New Deal. The Trump administration repeatedly has accused Democrats of going “far to the left” and becoming “radical” for embracing such ideas.

“But most of all, from my standpoint as an economics guy, they don’t have prosperity. They generate poverty,” Kudlow said.

“We are at the beginning of a new prosperity wave in this country. We are the hottest economy in the world. Confidence is building,” he said. “Why would we want to pursue policies that could—I think in total—slice 15 percent of GDP right out within 10 years?”

The Medicare for All plan would cost the economy more than $32 trillion over a decade, according to a study by the Mercatus Center at George Mason University, a libertarian policy center. Historic tax increases would be required to pay for the price tag, stated the report. And these tax hikes would lower household incomes by $17,000 annually, according to the estimates of the White House Council of Economic Advisers.

Many of the Democratic presidential candidates, including Sens. Cory Booker (N.J.), Kirsten Gillibrand (N.Y.), Elizabeth Warren (Mass.), and Kamala Harris (Calif.), are among the co-sponsors of both Medicare for All and the Green New Deal.

Heading into 2020 elections, exposing socialism will be a key focus of Trump’s reelection campaign, according to Kayleigh McEnany, press secretary for the Trump 2020 campaign.

She told The Epoch Times that the campaign didn’t plan to tackle socialism, but had to make an adjustment, given that a majority of the contenders support the ideology.

Separately, Kudlow stressed that he believed in the Federal Reserve’s independence. He defended Trump’s comments about desiring lower interest rates, stating that he was expressing his opinions.

“The President believes and I contend that Fed’s target rate should be lower,” Kudlow said.

He noted the Fed’s target inflation numbers were coming down and this could lead to lower interest rates.

When asked whether Trump knows about the Fed’s dual mandate, which are maximum employment and stable prices, Kudlow said, “Of course he does.”

Kudlow also noted that economic growth in the first quarter was “coming in much stronger than a lot of us feared,” and repeated that growth would be 3 percent in 2019.

Kudlow said his views about immigration have changed. He and Stephen Moore, Trump’s Fed board nominee, once criticized Trump’s position on immigration.

“The more we learned, the more we changed our view on this. I think the president has very sound immigration views frankly, once we got to know more about that.”