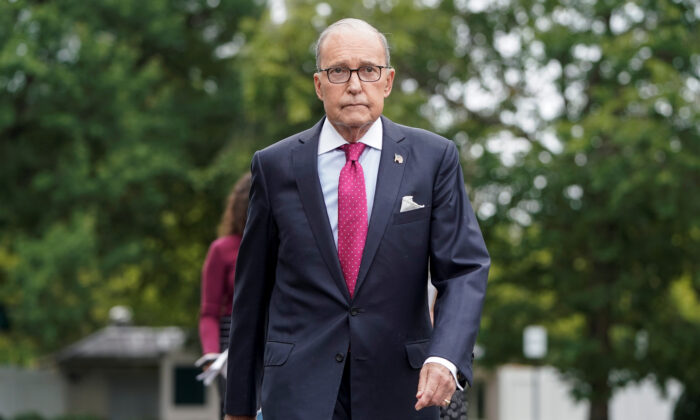 Director of the National Economic Council Larry Kudlow arrives to speak to the media at the White House in Washington, D.C. on Sept. 6, 2019. (Joshua Roberts/Reuters)
Economy

Larry Kudlow, who serves as director of the White House National Economic Council, said the White House is eying another round of stimulus checks for people who “are most in need.”

“Probably, we would want to target those to those folks who lost their jobs and are most in need,” Kudlow told Fox News Business on Tuesday. “That’s the speculation on my part, but I think … that’s where it’s going.”

There will be a discussion on how to proceed in Congress to pass the measure following the July 4 recess, adding that “tax rebates or the direct mail checks” are also being considered. He said that the White House is looking to pursue “incentive-oriented policies” to get Americans back to work.

President Trump has considered deductions for entertainment, tourism, and restaurant industries—which have been hit particularly hard during the CCP (Chinese Communist Party) virus pandemic. Many of those businesses were forced to shut down or rely on pickup only in an attempt to curb the spread of the virus.

When he was asked about sending more checks, “Yeah, we are,” Trump told a correspondent for Scripps. “We will be doing another stimulus package. It’ll be very good. It’ll be very generous.”

“I think we’re going to seriously look at whether we want to do more direct money to stimulate the economy,” Mnuchin said earlier this month. “But I think this is all going to be about getting people back to work, and we look forward to working with the entire Senate on this.”

“[Trump has] always wanted a second round of stimulus checks, and probably for good reason,” Sen. Ken Cramer (R-N.D.) told reporters this week. “What we do next in addition to something like that should be very targeted, very specific to restarting, really restarting the economy. … I think direct contribution installments to individuals could be a nice, a nice stimulus.”

During months of shutdowns and business closures, more than 40 million people have filed for unemployment, according to Labor Department statistics.