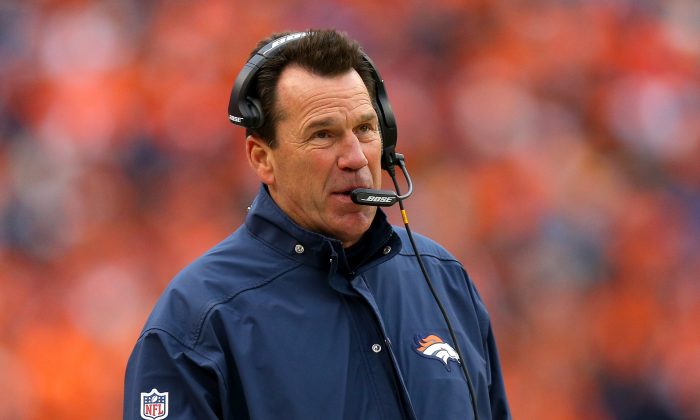 Gary Kubiak has the Broncos in the Super Bowl in his first year as head coach of Denver. (Justin Edmonds/Getty Images)
NFL

The Denver Broncos held off the New England Patriots 20–18 in the AFC title game on Jan. 24 to clinch their eighth Super Bowl appearance in franchise history.

The win was largely the result of a tough defense that held off Tom Brady, Rob Gronkowski and company several times in the fourth quarter after Denver’s offense failed to put the game away.

“We grinded all game long,” said Kubiak in the speech. “We played defense like I’ve never seen before.”

Every bit of that defensive effort was needed late in the final period to hold off the hard-charging Broncos.

After Denver’s Brandon McManus hit a 31-yard field goal to put the Broncos up 20–12 with 10:02 left in the fourth, the team’s top-ranked defense bent, but ultimately stopped Brady’s Patriots on a pair of fourth downs only to have the offense go three-and-out on the ensuing possessions.

Finally, New England reached the end zone with 12 seconds left after converting a fourth-and-goal from the four (their second fourth-down conversion of the drive) with a pass to Gronkowski in the end zone. But Brady’s pass attempt to Julian Edelman on the two-point conversion was deflected and then picked off by Denver cornerback Bradley Roby.

Brady’s line 27/56 passing for 310 yards, 1 TD, and 2 Ints was largely the result of a relentless pass rush—and a non-existent running game. The Patriots ran the ball 14 times for just 31 yards and with little mystery of what New England was going to do, Denver’s front four was able to routinely get into the backfield and hurry the two-time MVP’s throws. In all Brady was sacked four times and absorbed 20 quarterback hits.

Still, Brady was able find Rob Gronkowski for a pair of fourth-down conversions in the final drive to put them into a position to potentially send the game to overtime. Gronkowski finished with team-highs of eight catches for 144 yards.

Meanwhile 39-year-old Peyton Manning did enough to steer the offense to victory and will compete in his fourth Super Bowl as the oldest ever to start at quarterback on the NFL’s biggest stage.