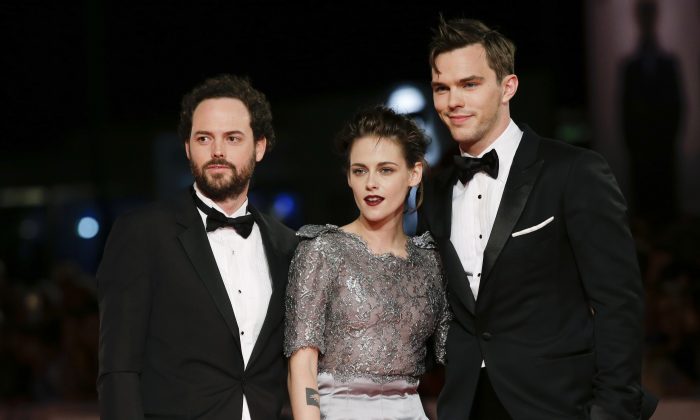 Drake Doremus, Kristen Stewart and Nicholas Hoult pose for photographers at the premiere of the film Equals during the 72nd edition of the Venice Film Festival in Venice, Italy, Saturday, Sept. 5, 2015. (AP Photo/Andrew Medichini)
Entertainment

VENICE, Italy — The movie business: What’s love got to do with it? For director Drake Doremus, everything.

The American filmmaker behind troubled-love stories “Like Crazy” and “Breathe In” is back with “Equals,” a science-fiction romance that puts Kristen Stewart and Nicholas Hoult into a future society where emotions — messy, disruptive things — have been genetically suppressed for the good of humanity.

Their characters, Nia and Silas, develop feelings which blossom into a secret love that shakes their identities and endangers their lives.

Doremus — a self-declared romantic — says the film grew from wanting to explore “a world where love is not essential to human beings … and whether love will always find a way or whether it won’t.”

“Cynically finding my way to hope, really,” the director said Saturday at the Venice Film Festival, where “Equals” is one of 21 films competing for the top Golden Lion prize.

Stewart shares her director’s passion for feelings, and thinks the film’s anti-emotional society isn’t too far from our own.

“There are aspects of our world that are entirely subdued,” Stewart said during an interview a few hours before the film’s red-carpet world premiere. “Why can’t we be a little f—— crazy some of the time? Why can’t we just feel unabashedly?

There Are Film Festivals – and Then There Is Cannes

“Even if you’re a little bit crazy, even if you make mistakes, OK, fine — at least you’re living.”

Even so, Stewart acknowledges making this film was “daunting.” She and Hoult are onscreen much of the time, often in close-up, and must bare their emotions with subtle conviction.

“I was really scared of it,” she said. The story “was so simple and so basic that it could have been absolute trite, messy nothing — or it could be everything. It could be the most moving emotional experience.”

“Equals” has a screenplay by Nathan Parker — who also wrote low-budget lunar hit “Moon” — and is the first film Doremus has shot from a finished script rather than developed through improvisation.

He rehearsed the actors for a week before filming, an experience Hoult said he found liberating.

“Often in a script you’ll see (that) your character cries,” the actor said. “And you turn up on the set that day and you think, everyone knows I’m meant to cry now. And it’s suddenly so much pressure.

“Drake doesn’t do any of those things. He’s like, just be — and be vulnerable and honest.”

The result is a sleek, subdued film that won praise from some viewers in Venice but left others cold.

Most agreed that both the leads and the landscape look gorgeous. The film was shot largely in Japan, using the minimalist modern buildings of architect Tadao Ando as a backdrop. The effect is dystopia crossed with Dwell magazine.

“It was so functional and beautiful, but so stifling,” Stewart said of the architecture. “You’re like, ‘It’s gorgeous. I just want to stare at everything, yet I want to run away from it.'”

Despite its future setting, the movie’s tale of forbidden young love is as old as time, and the film shares plot points with Shakespeare’s “Romeo and Juliet.” Like that play, “Equals” seems likely to appeal to the young, especially given the big teen fan bases of Stewart and Hoult.

Both are now 25, with years of fame behind them. Stewart began starring in the “Twilight” films as a teenager, while Hoult has been in the spotlight since he was the awkward child hero of 2002’s “About a Boy.”

Both have thrived by going in unexpected directions, making smaller art-house films alongside more mainstream fare.

“I think that’s the trick — for people to not quite know what’s going to happen next,” said Hoult, recently seen in the much scruffier sci-fi world of “Mad Max: Fury Road.”

“I so lead with my gut that there’s never anything too tactical,” added Stewart. “I’m never tactically maneuvering my career.”