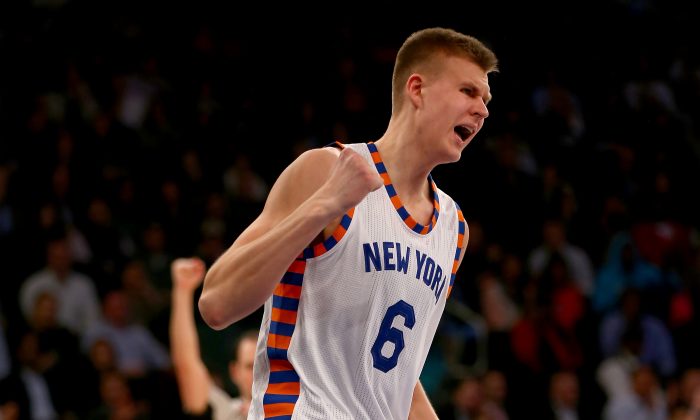 Kristaps Porzingis of the New York Knicks scored 29 points and grabbed 13 rebounds in the win over Charlotte on November 17. (Elsa/Getty Images)
NBA

Following Kristaps Porzingis’s 29-point, 13-rebound effort in the Knicks’ 102–94 win over Charlotte Tuesday night, it’s now official: We erred in jumping all over New York and Phil Jackson for selecting the Latvian giant with the fourth overall pick last June. Who knew this international prospect would be this good, this quickly? (FYI, most of us were still reeling from the infamous Frédéric Weis selection 16 years ago.)

But Porzingis is no Weis—who never made the team and is infamous for being posterized by Vince Carter in the 2000 Olympics.

The 7-foot-3-inch Porzingis is averaging 12.8 points, 8.6 rebounds, and 1.1 blocks a game for the much-improved 6–6 Knicks, who didn’t win their sixth game last year until January 19th—42 games into the season.

The power forward, who on Tuesday hit a pair of threes as well as a turnaround jumper in the lane (reminiscent of Hakeem Olajuwon’s “dream shake”), wasn’t high on the wish list for many Knicks fans. And those “experts” in the media (like myself) weren’t that high on him either, mainly due to the decreasing number of international successful big men in the game today. Yet the numbers speak for themselves.

Porzingis is second among all rookies in rebounding, third in scoring, and already has five double-doubles on the season.

The key is his age, though. Porzingis is doing this as a kid who turned 20 just three short months ago.

How does that project for his career? Look at another tall foreigner with unlimited range on his jump shot, Dirk Nowitzki. The 7-foot German averaged just 8.2 points and 3.4 rebounds a game as a 20-year-old for Don Nelson in Dallas 17 years ago.

The next year, those numbers jumped to 17.5 points and 6.5 rebounds a game. By the time he was 22, Nowitzki was a third-team All-NBA selection. Thirteen All-Star selections later, Nowitzki is a former MVP who led Dallas to the 2011 NBA title and is currently ninth all-time in scoring.

We won’t know for a while how the rest of Porzingis’s career compares to Nowitzki’s, but at least he’s already surpassed Weis.