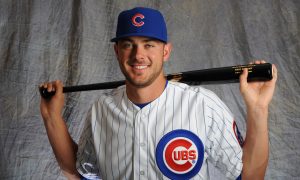 Chicago’s Kris Bryant is quickly adjusting to life in the big leagues. That much is for sure.

The Cubs 23-year-old third baseman phenomenon—who was held back in Triple-A to start the year despite hitting 43 home runs in the minors last season—had a hit in two at-bats Sunday to run his hitting streak to seven games.

Overall in 2015, Bryant is hitting .291/.426/.476 (average/on-base/slugging)—good marks for sure and a great sign of the future for a team that hasn’t won the World Series in more than a hundred years.

Bryant has been especially hot of late. Over the past nine games the former second overall pick of the 2013 MLB draft has hit four home runs with an incredible line of .323/.447/.806.

Should we start the Hall of Fame countdown now?

Few have taken the big leagues by storm so quickly. Of course, not all can sustain it. Everyone has his own path.

In 2011, 21-year-old Jesus Montero came up as a much-hyped Yankees prospect and promptly announced he was ready for big league pitching by hitting .328/.406/.590 in an 18-game September audition.

I was a believer (apparently I’m a sucker) and so apparently were the Mariners, who gave away current Yankees ace Michael Pineda in a deal for him that offseason.

Four years and one 50-game PED suspension later, Montero is back in the minor leagues—albeit with a decent-looking .333 batting average this season.

Kris Bryant Still Raking in the Minors: Who’s to Blame?

The same year Montero made his debut, the Royals brought up prized hitting prospect Eric Hosmer. The-then 21-year-old Hosmer, a May call-up after blistering Triple-A pitching to the tune of a .439 average, hit .293 with 19 homers and 78 RBIs in 128 big-league games.

He, too looked like the savior for a franchise in need of one.

On the flip side, when the Marlins promoted 20-year-old mega-prospect Miguel Cabrera in June of 2003, he started hitting immediately—12 home runs and a .263 average in 87 games that year—and has yet to stop. Now with 400 career home runs, a pair of MVP awards, and a World Series title—as a rookie—to his name, Cabrera is already one of the all-time greats and has a spot waiting for him in Cooperstown, whenever he decides to hang them up.

The lesson as always, 28 games is generally too early to reserve a spot in the Hall of Fame for Bryant—unless he leads the Cubs World Series title this year.