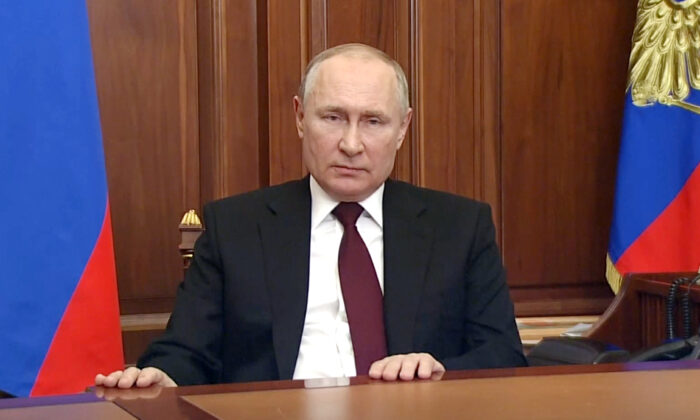 Russian President Vladimir Putin addresses the nation at the Kremlin in Moscow on Feb. 21, 2022, in a still from video. (Russian Pool via Reuters/Screenshot via The Epoch Times)
Europe

Russian President Vladimir Putin will decide when the invasion of Ukraine will end, said a top Kremlin spokesman on Thursday, coming hours after Russian military forces attacked several Ukrainian cities in what appears to be the most significant European land invasion in decades.

The operation “has its goals and they need to be achieved,” Kremlin spokesman Dmitry Peskov told Russian state-run media when asked when the operation would end. He did not provide a timetable.

Moscow is determined to “neutralize the [Ukrainian] military potential, which was boosted considerably lately, including with the active assistance of foreign nations,” Peskov continued to say, without elaborating or providing details.

Peskov claimed that Russia will not attempt to occupy Ukraine, a country of more than 40 million people, and said the invasion was intended to have limited goals in protecting Moscow’s interests. Video footage uploaded online showed Russian troops manning checkpoints around Kharkiv, located near the Russia-Ukraine border, and other areas.

Sirens wailed in Ukraine’s capital, large explosions were heard there and in other cities, and people massed in train stations and took to roads, as the government said the former Soviet republic was seeing a long-anticipated invasion from the east, north, and south. It reported more than 40 soldiers had been killed and dozens wounded so far.

Ukrainian President Volodymyr Zelensky severed diplomatic ties with Moscow and declared martial law across the country, while writing on social media that any Ukrainian who wishes to fight against Russia will be provided weapons.

“As of today, our countries are on different sides of world history,” Zelensky wrote. “Russia has embarked on a path of evil, but Ukraine is defending itself and won’t give up its freedom.”

The Russian Defense Ministry said it was not targeting cities, but using precision weapons and claimed that “there is no threat to civilian population.” However, video footage uploaded online on Thursday morning appeared to show the remnants of non-precision weapons, including Grad rockets, that had exploded in Ukrainian civilian areas.

Western leaders unilaterally condemned Putin for the invasion and said they would impose significant sanctions against Moscow. President Joe Biden’s administration said he would make an announcement on more sanctions against Russia later Thursday.