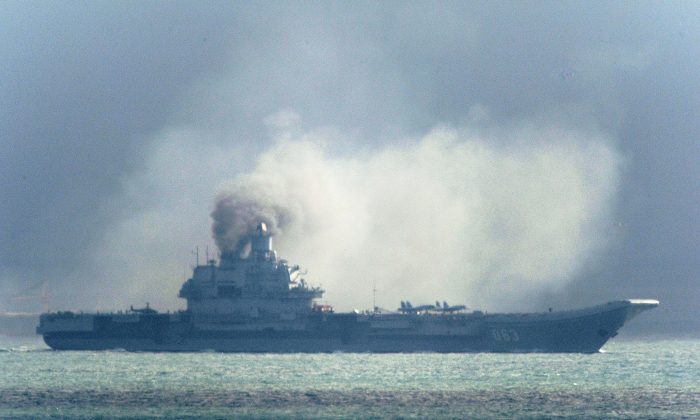 The Russian aircraft carrier Admiral Kuznetsov passes within a few miles of Dover, in the southeast of England as a fleet of Russian warships sail through the North Sea, and the English Channel Friday, on Oct. 21, 2016. (Gareth Fuller/PA Wire)
International

The Russian statement came as intense clashes were reported in northern Syria between Turkish troops and Turkey-backed opposition fighters with Kurdish-led forces. The Syrian army command condemned the fresh offensive by Turkish troops inside Syria, describing it as “an occupation that will be dealt with by all available means.”

The Turkish military intervened in the Syrian war in August this year under orders from Ankara to clear the border area of Islamic State fighters and U.S.-backed Syrian Kurdish forces linked to Turkey’s own outlawed Kurdish insurgency. The Turkish government considers both to be terrorist groups.

Russia’s Dmitry Peskov said Assad needs to stay in power to prevent the country from falling into the hands of jihadis.

Peskov’s statement comes as the break in the fighting Russia has declared in the besieged city of Aleppo entered its third day before seemingly collapsing Saturday night. He said Russia’s decision to extend the break, which was initially declared for just one day Thursday, wasn’t a concession to Western pressure.

The U.N. greeted the lull intended to allow the evacuation of wounded civilians and fighters from the rebel-held eastern neighborhoods of Aleppo that had been devastated by airstrikes. But the rebels rejected the offer to evacuate and no evacuations were seen along the corridors created by the Syrian government.

A U.N. official told The Associated Press that Syrian opposition fighters were blocking the evacuations because the Syrian government and Russia were not holding up their end of the deal and were impeding deliveries of medical and humanitarian supplies into Aleppo.

The Britain-based Syrian Observatory for Human Rights said the truce collapsed while the Aleppo Media Center, an activist collective, reported artillery shelling on different neighborhoods and an attempt by government forces to advance south of the city. They had no word on casualties.

Russian Foreign Ministry spokeswoman Maria Zakharova said the West was turning a blind eye to the al-Qaida militants blocking humanitarian aid deliveries to Aleppo and trying to shift the blame onto Moscow.

“It’s mean and cynical to … watch the Nusra block the delivery of food and medicines to civilians while blaming Russia for the humanitarian catastrophe in Aleppo,” she said.

Russia launched an air campaign in support of Assad a year ago, helping his forces win back some key ground. The relentless bombing of Aleppo, the country’s largest city and its commercial hub before the war, has caused international outrage.

Peskov said the goal of the Russian campaign is to fight “terrorists,” saying that the fall of the Syrian government would cause new flows of refugees and more terror attacks in Europe.

“Some countries are trying to play with the devil and use terrorists to get rid of Assad, and some just say thoughtlessly that Assad must leave,” Peskov said. “If Damascus falls and terrorists take hold there, there will be no political settlement then.”

He said there is little hope that the Syrian conflict could end soon, adding that it will require a “long and hard work by the international community.”

“The territory of Syria must be liberated,” Peskov said. “It must be liberated and everything must be done to prevent the country’s breakup, which could have catastrophic consequences for the entire region.”

Asked if the deployment of a Russian aircraft carrier into the eastern Mediterranean was intended as a warning for the U.S. against striking Assad’s forces, Peskov said Russia already has sufficient military assets in Syria.

The Admiral Kuznetsov carrier and escorting ships sailed through the English Channel Friday en route to Syria’s shores. Russia has a navy repair supply facility in the Syrian port of Tartus, the only such outpost the country has outside the former Soviet Union.

“There are plenty of instruments already there to control the skies and the security of our infrastructure in Syria,” Peskov said.

Earlier this month, the Russian military warned the U.S. against striking the Syrian army, stressing that Russian air defense weapons in Syria stand ready to fend off any attack.

The Observatory said the fighting between the Turkey-backed fighters and the Kurdish-led Syria Democratic Forces was concentrated near the town of Tel Rifaat.

Ahmad Araj, member of the Syrian National Democratic Coalition, which is allied with the Kurds, told the AP that Turkish tanks crossed the border near the town of Marea and were heading toward Tel Rifaat.

The Observatory said 13 Turkey-backed rebels and three SDF fighters were killed in the fighting.

Turkish President Recep Tayyip Erdogan has been one of the Syrian rebels’ strongest backers.

On Thursday, Turkey said it conducted air raids on 18 targets in northern Syria, adding that between 160 and 200 militia fighters were killed. The Observatory said the airstrikes killed 15 SDF fighters and four civilians.

The Syrian army statement said “the new aggressive stance by Erdogan’s regime is a dangerous escalation and flagrant violation” of Syria’s sovereignty. It added that Erdogan’s government has been playing a “dirty role in harboring, training, arming and funding terrorist groups and opening its borders to facilitate the crossing of thousands of terrorists and mercenaries into Syria’s territories.”

Erdogan said Ankara will be expanding its operations in north Syria, including entering areas such as al-Bab, and Raqqa that are held by the Islamic State group and the town of Manbij that is under the control of the SDF.

He added that if the U.S.-led coalition was ready to act jointly, Turkey would do “whatever is necessary” against IS in Raqqa, but Kurdish militants should not have a role.