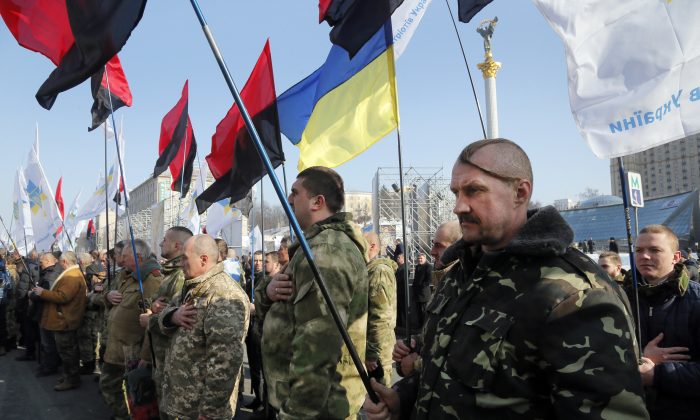 Ukrainian army veterans sing the national anthem to pay tribute to the victims of the 2013-2014 anti-government protests called the Revolution of Dignity, during commemoration events in central Kiev, Ukraine on Feb. 20, 2017. (AP Photo/Efrem Lukatsky)
International

MOSCOW—The Kremlin on Monday defended its decision to recognize passports issued by separatist authorities in eastern Ukraine, saying it came as a response to Ukraine’s blockade of rebel regions.

The statements came as demonstrators in the Ukrainian capital of Kiev marked the third anniversary of events that led to the ouster of the nation’s Russia-friendly president in 2014 with protests and wreath-laying.

The weekend move by Putin to recognize passports and other documents issued by rebel authorities has drawn sharp criticism from Ukraine, which called it a violation of a 2-year-old peace deal.

Ukrainian forces have been fighting Russia-backed separatists in eastern Ukraine since April 2014, a conflict that has killed more than 9,800 people.

Peskov called Putin’s decree a “humanitarian” gesture to help struggling rebel regions that have faced a transportation blockade imposed by Ukrainian nationalists. The blockade has made it impossible for eastern residents to travel to the Ukrainian government-held side to get or extend their passports and other papers, he said.

In a conference call with reporters, Peskov rejected Ukraine’s claim that the move violated the 2015 peace deal, noting Putin’s action does not officially recognize the rebel regions.

“These aren’t the documents of an officially recognized state. They are de facto issued on the territory,” he said.

Steffen Seibert, a spokesman for German Chancellor Angela Merkel, called Russia’s recognition of the rebel documents “totally unacceptable,” while German Foreign Ministry spokesman Martin Schaefer also described it as “a clear violation of the spirit and aims of the Minsk (peace) agreements.”

EU Envoys Back Keeping Sanctions Against Russia Over Ukraine

Schaefer said the move gives people from Ukraine’s rebellious regions privileges in Russia, despite the fact that, under international law, only states can issue passports.

Germany and France helped broker the February 2015 peace deal for eastern Ukraine that was signed in the Belarusian capital of Minsk. The agreement has helped reduce the fighting, but clashes have continued and attempts at a political settlement have stalled.

The U.S. and the European Union imposed sanctions on Russia for its 2014 annexation of Ukraine’s Crimean Peninsula and its support for insurgents in eastern Ukraine. They have made lifting those sanctions contingent on the progress of the Minsk deal.

Ukrainian President Petro Poroshenko warned Friday against any “appeasement” of Russia and said the Trump administration has a “historic chance” to halt Moscow’s ambitions. The statement appeared to reflect Ukraine’s uneasiness about Trump, who has praised Putin and vowed to improve relations with Russia.

Ukrainian lawmaker Andrii Artemenko has offered a rival peace plan envisioning a referendum on leasing Crimea to Russia for 50 or 100 years to precede the Russian troops’ withdrawal from the east. The New York Times reported that Artemenko’s proposal was given to Michael Flynn before he resigned as Trump’s national security adviser.

Peskov said the Kremlin knew nothing about Artemenko’s proposal, which he dismissed as “absurd.”

Russia isn’t going “to rent its own region,” he said.

Poroshenko, meanwhile, also faces challenges at home, where a worsening economy has fueled public discontent and nationalists have pushed for a tougher course against rebel regions.

On Sunday, nationalist protesters in Kiev who support the blockade of eastern regions clashed with police outside the presidential administration building.

The government has criticized the blockade, saying it hurts ordinary Ukrainians in the rest of the country by cutting off coal shipments from separatist regions. That has resulted in power shortages in government-held parts of Ukraine.

Poroshenko warned the blockade could bring the nation’s metals industries to a halt, leaving 300,000 people without jobs and denying the cash-strapped government $2 billion in export earnings.

He also said it would push more people in the east to join the rebels.

“What is better for us—to have them working in mines or shooting at our soldiers?” he said.

Volodymyr Fesenko of the Penta research center, an independent Kiev-based think-tank, said the nationalist leaders of volunteer battalions have launched the blockade to cause tensions and encourage calls for a new election.

“It’s an attempt to destabilize political situation in Ukraine,” he said.

On Monday, more demonstrators filled the streets of Kiev to honor the victims of Feb. 20, 2014, when snipers shot dozens of protesters pushing for the ouster of then-President Viktor Yanukovich. The Moscow-friendly ruler was chased from power the next day.