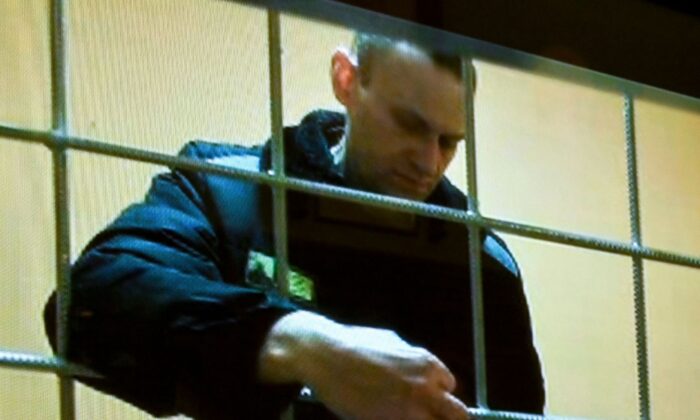 Opposition leader Alexei Navalny appears on a screen set up at a courtroom of the Moscow City Court via a video link from his prison colony during a hearing in Moscow on May 24, 2022. (Alexander Nemenov/AFP via Getty Images)
Europe

Alexei Navalny, an anti-corruption activist best-known for being Russian President Vladimir Putin’s loudest critic, revealed he has been ordered to spend time in solitary confinement.

“There’s only a mug and a book in my cell. I only get a spoon at mealtimes. They even took away my prison clothes and gave me temporary ones,” Navalny said in a Twitter thread shared on Monday. “Greetings from solitary confinement.”

His punishment comes just more than a week after he revealed that he set up a labor union for convicts, of which he said he was the only member at the time. So far, the organization has successfully argued for replacing backless stools with chairs in the prison’s sewing shop where he works, Navalny noted.

“The Kremlin wants to see its Gulag composed of silent slaves. But here I am rallying people and demanding that some laws be obeyed,” he said. “So I was summoned from my barrack to the commission, where they announced that video footage showed me regularly unbuttoning the top button of my prison robe while in the industrial zone (the robe is just a few sizes too small for me.”

“This, of course, characterizes me as an unrepentant, incorrigible villain,” the Kremlin critic continued. “That is why the decision was made to put me in a special housing unit.”

Navalny said that so far, he’s only spent three days in isolation, but also expressed concern that he would miss an upcoming visit with relatives, which he is allowed every four months.

“No visits are allowed to those in the SHU, so they say unless I ‘reconsider my attitude,’ it will become my permanent residence,” he said in a tweet. “It is not clear what attitude I should reconsider. Toward slave labor? Or toward Putin?”

Back in March, Navalny was sentenced to nine years at a high-security facility on fraud and contempt charges, which he has repeatedly claimed are politically motivated. He was initially arrested in January 2021 upon returning from a hospital in Germany, where he had been recuperating from what he has called an assassination attempt carried out by the Kremlin.

His followers revealed he first fell ill during a flight from Tomsk to Moscow in August 2020, with several labs around the world having since confirmed he was poisoned with the Soviet-era nerve agent, Novichok.

At that time, he was sentenced to more than two years in prison for violating probation.

Navalny in June said he could face an additional 15 years behind bars over allegations that he has encouraged unsanctioned rallies and that he created “an extremist group to fan hatred against officials and oligarchs.” He added any punishment is simply part of a government effort to keep him behind bars as long as possible.