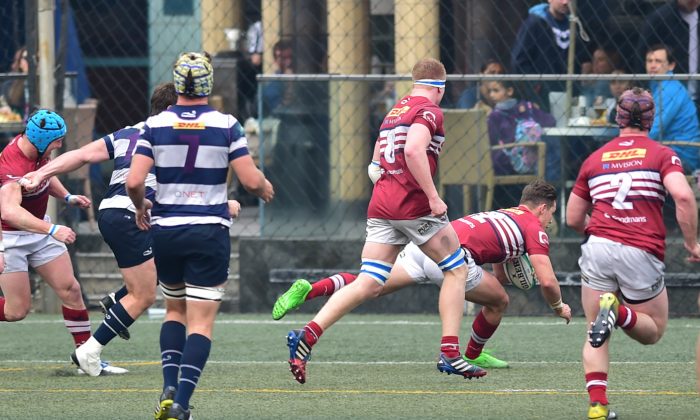 Richard Lankshear goes over for Sabre Kowloon’s second try of the match, also converted by Lankshear to give the visitor a 12-5 lead at half time in the HKRU Grand Championship Quarter Final against Natixis HKFC on Saturday Feb 27, 2016. In a nailbiting finish the Kowloon defence held out to win 18-12 to move them into the Semi-final against Leighton Asia HKCC this coming Saturday. (Bill Cox/Epoch Times)
HK Rugby Union

Kowloon Put Club to the Sabre; and Scottish Prove Brave Against Tigers

The first Quarterfinal was between Nataxis Hong Kong Football Club versus Sabre Kowloon. Club had come third in the League and only a narrow points difference meant they played in the quarters whilst Cricket Club enjoyed a bye to the semi-final. Kowloon had struggled all season, only mustering three victories in fifteen games, and propped up the League in sixth, more than 20points adrift of Club. But knockout rugby often has scant respect for form, and Kowloon, on the day, proved more than equal to Club and edged the match 18-12. Clubs first loss in 2016.

Kowloon took the game to Club, dominated territory, tackled hard, and kicked intelligently, and when Club did respond and pressured the Kowloon line, their defence held firm. Kowloon started quickly, and after only 5mins, prop Angus Dixon scored to give Kowloon and early lead 5-0. Club leveled through prop Ronan Donnelly, yet Kowloon immediately replied with a converted try by centre Richard Lankshear. By half time, Kowloon led 12-5.

The second half started poorly for Club, with centre Tom McColl sin-binned. It gave Kowloon numeric advantage, that was translated into points, with two penalties by flyhalf Jack Neville, to give Kowloon an 18-5 lead with 20minutes to go. Rallied by Jamie Hood, Club fought back, but a late consolation try was simply not enough: and Kowloon won 18-12. The Club try made the scoreline more respectable, but could not compensate Club for an opportunity missed. Kowloon celebrate. Club commiserate. Next week Kowloon need to find form again, as they face Leighton Asia Hong Kong Cricket Club.

The other quarterfinal was played at Kings Park, between Borelli Walsh Tigers, who came fourth in the league, against Bloomberg Hong Kong Scottish, who came fifth. This was always going to be a close tussle. The teams had played each other three times in the season, with Scottish leading the head-to-head 2-1. All games had been close, with only a single-digit score difference separating the teams every time. This match was no different. Scottish came away winners 23-20, after 9minutes of extra time, with a golden score to decide the result.

Scottish took an early lead with three tries, and one conversion, against the run of play, by wingers Sean Cowley (1) and Alessandro Nardoni (2), with Charles Cheung converting one from three. It gave Scottish a 17-0 lead, and left Tigers to rue missed penalties and poor kicking that presented opportunities Scottish took full advantage of. From hereon Tigers slowly edged back into the game. Scottish fullback Ben Tyler was sinbinned, and Tigers eventually managed to get points on the board, with a penalty on the stroke of half time by centre Liam Gallagher. 17-3 to Scottish at halftime.

The second half was dominated by Tigers. They could not convert possession and territory into points. Liam Gallagher and Charles Cheung traded penalties, and with 20minutes to play, Scottish led 20-6. There was still sting in the Tigers tail, and a converted try by flanker Calvin Hunter, reduced the deficit to 20-13. And in the 79th minute, Tigers lock Craig Lodge, crossed the tryline after considerable Tigers pressure to make it 20-18…and flyhalf Matt Price, tied the match 20-20, with an ice-cool conversion.

The game went into extra time, with a golden score to decide the winner. The first opportunity fell to Tigers, but the drop goal, like so many Tigers kicks during this match, drifted wide. The deadlock was broken after 9minutes of play, when Scottish fullback Ben Tyler mopped-up another poor Tigers clearance kick, and slotted a drop goal for victory: Scottish winners, 23-20. Tigers tamed, and were left ruing their missed chances. Scottish, who stood proud in defence and took their chances, now look forward to a semifinal against champions Societe Generale Valley next week.