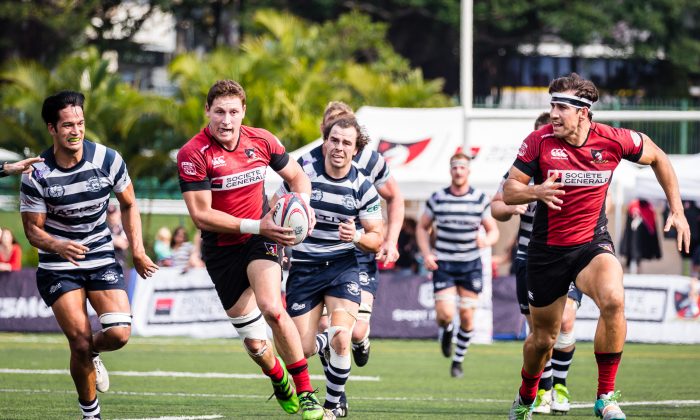 Valley scrum half, Ruan Duplooy attacks during the Grand Championship semi-final against HKFC at Happy Valley on Saturday March 4. Valley won the encounter 27-14 to progress to meet Kowloon RFC in the final, this coming Saturday. (Dan Marchant)
HK Sports

HONG KONG—On Saturday Societe Generale Valley and Kowloon booked their places in the final of the Hong Kong Rugby Premiership Championship, with respective semifinal wins over Nataxis Hong Kong Football Club and Borrelli Walsh Tigers. Both matches were close contest reflecting the tight nature of the Championship this season.

Valley played first, in the opening match of the afternoon, hosting HKFC at Happy Valley and worked hard for their win 27-14.   Valley began brightly moving out to a 10-0 lead, with a try from scrumhalf Ruan Duplooy, and conversion and penalty goal from flyhalf Ben Rimene. HKFC has a habit of clawing back at Valley: two penalty goals from flyhalf Nate de Thierry narrowed the score to 10-6, and HKFC looked as though they could upset the form book.

In the second-half, HKFC continued to apply pressure to Valley. De Thierry added another penalty goal to narrow the score to only one point, 10-9: and for HKFC it looked as though hope was turning into belief. But Valley restored the four point margin with a penalty goal by Rimene.

After 60 minutes, the Valley bench came on and began to have an immediate impact on the final quarter of the game. Valley has an embarrassing wealth of talent to call on. Their bench was pivotal in giving the momentum to Valley to dent the HKFC’s effort. That effort had prevented Valley dictating the game, forced errors from Valley. The bench players turned the tide and restored discipline into Valley’s game. Matt Rosslee, on as a substitute centre, soon scored, Rimene converted and Valley edged ahead 20-11, to breathe a little easier.

HKFC managed to reply, with try from winger Charlie Higson-Smith, the conversion was missed but the try provided a glimmer of hope for HKFC, with the score at 20-14. But Duplooy scored again for Valley, Rimene converted and the win sealed at 27-14.

The bench ensured the Valley intensity in the final quarter was equal to their first quarter effort: their opening 20 and final 20 minutes ensured the win. HKFC fought bravely, but had no answer to the Valley bench: the 23man game instead of 15 man gave Valley victory, and HKFC to ponder how to build and retain depth for next season.

Valley will play Kowloon, who had to fight hard to beat a spirited Tigers team, who defied their league status. Tigers came 6th in the league, but on their day, could perhaps beat any of the other sides. And in the championship playoffs you only have to win three matches, and Tigers had already dispensed with Hong Kong Scottish last week.

Kowloon eased to a 14-3 lead, with tries for Kowloon by Jamie Tsang and Ben Madgwick, both converted by Jack Neville. Tiger’s flyhalf Jamie Keith scored a penalty goal to put the visitors on the score board. Tigers chipped away at the Kowloon lead: Keith added another penalty before halftime, to narrow the score to 14-6. And in the second half, Tigers again applied pressure to Kowloon, and progressively narrowed the scored with penalties by Keith to give them a deserved 14-15 lead with 10minutes remaining.

In the final minutes, after resolute Tigers pressure pinned Kowloon back on their tryline, a penalty against Tigers proved disastrous. Kowloon worked the ball upfield, and created space for Neville to run in a try, against the run of play, from inside his half, for Kowloon to snatch victory from the jaws of defeat. Neville converted his try to give Kowloon an unexpected victory 21-15, to continue their 40th celebrations, and condemn Tigers to start planning for next season.

Valley will defend their title against Kowloon next week in what promises to be an enthralling end to the season. Valley has looked sharper in 2017, than they did in the early part of the season; and Kowloon remains deservedly undefeated this year. It is a match against the two teams with the best league record, both undefeated in 2017. One side will retain that status, one side will lose it. Will Valley continue to dominate, or Kowloon round-off their 40th celebrations in style?