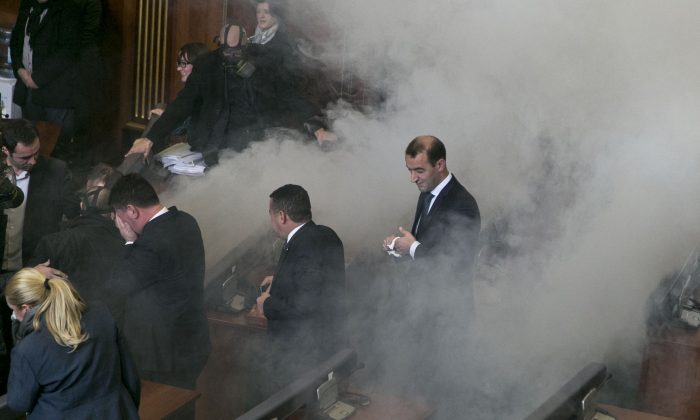 PRISTINA, Kosovo—Opposition lawmakers released tear gas Monday in Kosovo’s parliament as they once again tried to pressure the government into renouncing deals with Serbia and Montenegro.

Clouds of smoke from two tear gas canisters forced lawmakers out of the debating chamber.

An opposition political party, the Alliance for Kosovo’s Future, said one of its lawmakers, Pal Lekaj, was arrested, allegedly for using tear gas.

Meanwhile, police dispersed about 150 opposition supporters throwing stones and paint outside parliament. Windows were broken and some were covered in red paint. There were no reports of any injuries.

Clashes continued in other streets in the capital where at least one protester was arrested. Six cars were damaged and one of them burned, police said, adding that protesters tried to block streets with garbage containers.

Over the past three months, the opposition has blocked Kosovo’s parliament with tear gas, pepper spray, whistles, and water bottles to protest the deals, and their supporters have held violent protests in Pristina.

One of the deals gives more powers to ethnic Serbs in Kosovo while the other demarcates the border with Montenegro.

Kosovo declared independence from Serbia in 2008, an act that Serbia still rejects. The two countries have been holding European Union-mediated talks to overcome their differences.

He repeated the warning from U.S. Secretary of State John Kerry, who visited two weeks ago, that parliament is “where meaningful debates on public policy are conducted, where people can listen to each other peacefully.”

If the government refuses to halt the deals, the opposition wants a referendum on the issues or a new election. The government, the president, and the international community have called for dialogue.

The deal on Serb minority rights is suspended until Kosovo’s constitutional court rules on its legality. The government, which accuses the opposition of trying to seize power by force, has said it will ask international experts to decide on the border demarcation with Montenegro.