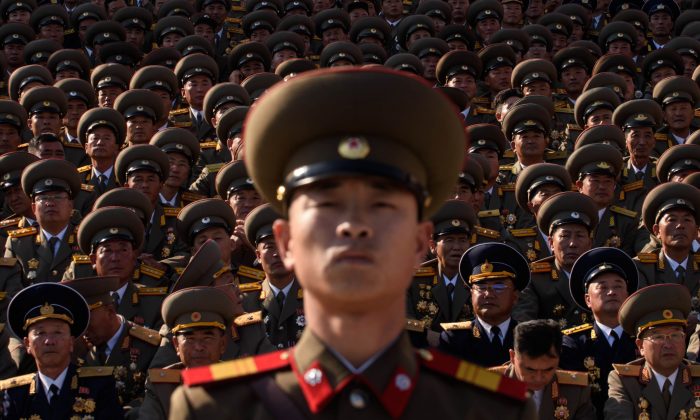 SEOUL, South Korea—North Korea trumpets a hydrogen bomb test. South Korea responds by cranking up blasts of harsh propaganda from giant green speakers aimed across the world’s most dangerous border. Now Pyongyang warns of war, even as it reportedly has started its own broadcasts.

As the world looked Saturday for ways to punish the North over a nuclear test that pushes Pyongyang closer to its goal of a nuclear-armed missile that can reach the U.S. mainland, the two Koreas have quickly slid into the kind of Cold War-era standoff that has defined their relationship over the past seven decades.

A top North Korean ruling party official’s warning that the South’s broadcasts have pushed the Korean Peninsula “toward the brink of war” is typical of Pyongyang’s over-the-top rhetoric. But it is also indicative of the real fury that the broadcasts, which criticize the country’s revered dictatorship, cause in the North.

Seoul resumed the cross-border broadcasts Friday for the first time in nearly five months. Pyongyang says the broadcasts are tantamount to an act of war. When Seoul Korea briefly resumed propaganda broadcasts in August after an 11-year break, Seoul says the two Koreas exchanged artillery fire.

South Korea’s Yonhap news agency, citing an anonymous military source, reported late Saturday that the North had started its own broadcasts, presumably to keep its soldiers from hearing the South Korean broadcasts. The North’s broadcasts were too weak to hear clearly on the South Korean side of the border. South Korean military officials wouldn’t confirm the Yonhap report.

Besides the “brink of war” comment, Workers’ Party Secretary Kim Ki Nam said in comments broadcasts on state TV on Friday that Pyongyang’s rivals are “jealous” of the North’s successful hydrogen bomb test.

Many outside governments and experts question whether the blast was in fact a powerful hydrogen test.

The South’s Yonhap news agency said Seoul had deployed missiles, artillery and other weapons systems near the border to swiftly deal with any possible North Korean provocation. The ministry did not confirm the report.

Responding to the bomb test, U.S. Secretary of State John Kerry urged China, the North’s only major ally and biggest aid provider, to end “business as usual” with North Korea.

The South Korean and U.S. militaries also discussed the deployment of U.S. “strategic assets,” Seoul’s Defense Ministry said. Officials refused to elaborate, but the assets would likely include B-52 bombers, F-22 stealth fighters and nuclear-powered submarines.

After North Korea’s third nuclear test, in 2013, the U.S. took the unusual step of sending its most powerful warplanes to drills with South Korea in a show of force. B-2 and B-52 bombers are capable of delivering nuclear weapons.

It may take weeks or longer to confirm or refute the North’s claim that it successfully tested a hydrogen bomb, which would mark a major and unanticipated advance for its still-limited nuclear arsenal. Outside experts are skeptical the blast was a hydrogen bomb, but even a test of an atomic bomb would push North Korea closer to building a nuclear warhead small enough to place on a long-range missile.

The Korea Institute of Nuclear Safety said a small amount of radioactive elements was found in air samples collected from the peninsula’s eastern seas after the blast, but the measured amount was too small to determine whether the North had really detonated a nuclear device. The institute will continue to collect and analyze more samples.