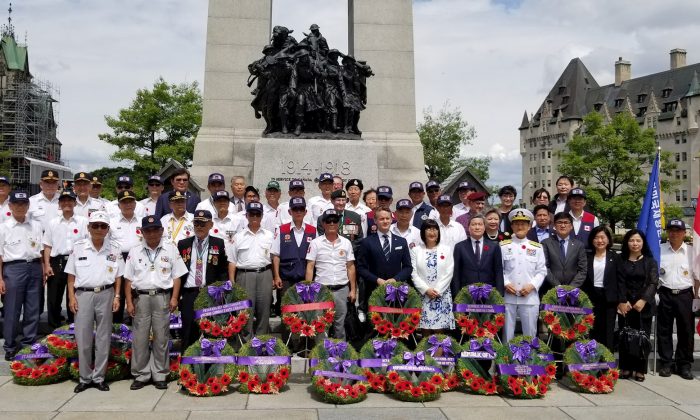 Veterans Affairs Minister Seamus O’Regan and Sen. Yonah Martin (7th and 8th from L) pose with Korean War veterans during a ceremony at the National War Memorial in Ottawa on June 24, 2018, marking the upcoming 65th anniversary of the Korean War armistice. Commemorative ceremonies will take place across the country on July 27, the date in 1953 when the war ended. (Courtesy of Sen. Yonah Martin)
Canada

For the few surviving veterans who fought in the ‘forgotten war,’ July 27 will be an emotional day
By Susan Korah

The haunting wail of a military bugle will echo off the polished granite structure known as the Wall of Remembrance in Brampton, Ont., on July 27, part of a commemorative service for the 516 Canadian soldiers killed in action in the Korean War from 1950 to 1953.

At one of the most poignant moments during the service, the few remaining veterans in attendance will place a poppy on each of 516 bronze plaques on the wall, which are inscribed with the names of their comrades killed in battle.

This year, the Brampton service and similar ceremonies across the country, taking place in various cities from British Columbia to Newfoundland and Labrador, will be special. July 27 marks the 65th anniversary of the armistice that ended the Korean War.

For the few surviving veterans, it will be an emotional day as they recall the bitter hostilities between the two divided regions of the Southeast Asian country: North Korea (Democratic People’s Republic of Korea) and South Korea (Republic of Korea).

Once described as the “forgotten war,” overshadowed as it was by the two world wars as well as the Vietnam War, the Korean War is becoming increasingly recognized in this country for the contributions of the 26,791 Canadian soldiers dispatched to the front lines.

“After the U.S. and U.K., Canada sent the third-largest contingent of troops to the conflict,” said Shin Maeng-ho, Ambassador of the Republic of Korea to Canada.

The Canadian soldiers sailed across the Pacific to join regiments from 15 other countries. They were part of a 16-country United Nations force that sent troops to defend South Korea after communist North Korean troops, armed with Soviet tanks, crossed the 38th parallel that divided the two regions and invaded the South in 1950.

The survivors who returned retain deeply etched memories of the horrors and tragedies of the war. But they also take comfort in knowing that they played their part in defending the freedom of the South Korean people and in helping build the foundations of the strong and prosperous nation that South Korea is today.

One such survivor is Bill Campbell, national president of the Korea Veterans Association of Canada, who enlisted at the age of 19. Today, at age 87, the former parachutist says he is “too old” to march with other veterans at the commemoration ceremony, but his memories of the war are as sharp as ever.

A native of Cape Breton, Nova Scotia, Campbell was just 19 when he volunteered to serve in Korea, following in the footsteps of older family members who had fought in both world wars.

“When we soldiers took the train to North Korea, we used to see thatched huts abandoned by refugees fleeing to the South, kids begging at train stations, and their parents completely disoriented. It was quite a shock, and even today I can’t forget that,” he recalls.

“But I also feel a sense of satisfaction when I see the miracle that is South Korea today. Koreans are brave, enterprising people and we helped them win their freedom—at a price of course. That makes me feel good.”

Another veteran, 89-year-old Claude Charland, was an officer in the mostly francophone regiment Royal 22, colloquially known as Van Doos.

“What I witnessed during the war was total devastation,” he says. “But the young (Korean) people today are so thankful for what we did.  I feel very welcome and appreciated every time I go back to Korea.”

Charland’s riveting wartime memories range from being ambushed at night and fighting in total darkness to trading his rifle once in a while for a hockey stick and playing a morale-boosting game with fellow soldiers on a frozen river behind the lines.

“We have been recreating these hockey games each year on the Rideau Canal in Ottawa since 2013,” he says, adding that it was Sen. Yonah Martin, the first Korean-Canadian to serve in the Senate, who pushed for the memorial games.

Senator Martin has in fact been a driving force in securing recognition for the bravery and sacrifices of Korean War veterans.

Martin herself has deeply personal connections to the war. “Sixty-five years is a long time for families split apart to wait for a chance to reunite,” she says, referring to the situation of North and South Koreans whose families were separated by the war, often never hearing from one another again.

“Unfortunately, my father passed away in 2008 and he will never see the family he lost,” she adds, her voice choking with emotion as she recounts the story of how her grandfather was forced to flee North Korea with some members of his family, traumatized at leaving behind her grandmother and one of her aunts who was pregnant at the time.

“Even after the armistice he never spoke about his loss.”

“My feeling toward the veterans is one of sincere respect and gratitude,” she says. “If not for them, I wouldn’t be here.”