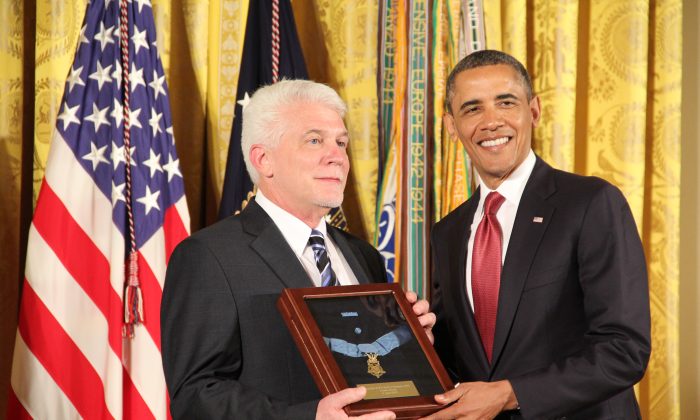 President Barack Obama presents the Medal of Honor, to Ray Kapaun, who as the nephew of deceased Korean War hero Chaplain Emil Kapaun, accepted the award on behalf of his uncle April 11, 2013 at the White House. (Shar Adams/Epoch Times Staff)
US

WASHINGTON — Barack Obama speaks at hundreds of ceremonies and gives dozens of awards, but presenting the Medal of Honor to the family of a Korean War hero held a special significance.

Chaplain Emil J. Kapaun’s amazing story of courage and faith in the face of adversity struck a chord with the president.

“This is the valor we honor today—an American soldier who didn’t fire a gun, but who wielded the mightiest weapon of all, a love for his brothers so pure that he was willing to die so that they might live,” Obama told those assembled for the presentation in the East Room of the White House, April 11.

In one remarkable account, Kapaun, on seeing a Chinese soldier preparing to shoot a wounded American trapped in a ditch, marched over and pushed the soldier aside. He then gathered up the wounded man and carried him for miles on the long march to the prison camp. That serviceman, Sgt. Herbert Miller, is alive today and was present at the White House to witness the award ceremony.

Kapaun was born in a small Kansas town not far from where the president’s grandfather, Stanley Dunham, was born and, like him, lived through the Great Depression.

“I obviously never met Father Kapaun. But I have a sense of the man he was, because in his story I see reflections of my own grandparents and their values,” Obama said.

Some have said the presentation of America’s highest military award for valor was long overdue.

In 1950 a communist force of some 20,000 Chinese soldiers descended on a few thousand American servicemen at Unsan in North Korea. Kapaun was there, racing out past the front lines to rescue the wounded.

The prison camps in North Korea were brutal, hostile, and cold. Many prisoners of war (POWs) froze, starved, or were tortured to death.

Kapaun was only 35 when he died in 1951 after six brutal months in a POW camp. Though he did not live to see freedom, his actions in the camp saved the lives of many who did.

Kapaun slipped into huts to pray with prisoners, gave away his clothing and food, and tended to the wounded. He encouraged the POWs to care for each other, their health, and their thoughts.

On Easter Sunday, Kapaun boldly conducted a service in an old church in the camp, leading the servicemen to sing psalms and “America the Beautiful,” to give them hope and remind them of home.

“They sang so loud that other prisoners across the camp not only heard them, they joined in, too—filling that valley with song and with prayer,” Obama said.

William Latham, author of “Cold Days in Hell,” which details the horrific conditions American POWs endured in Korea, attended the award ceremony with his family.

Latham said that the award highlighted the role that chaplains play in the military. “They don’t proselytize. … They set an example for everybody else in terms of ethical conduct.”

After presenting the award to an emotional Ray Kapaun, the chaplain’s nephew, Obama said Kapaun’s story was a testament to the strength of the human spirit. “I certainly have been extremely touched by it,” he said.