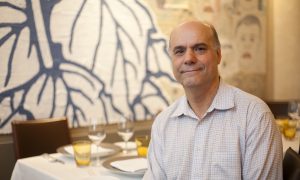 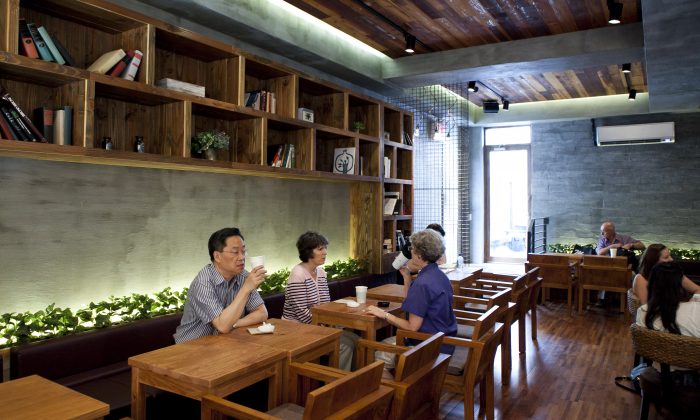 NEW YORK—An atmosphere of solid natural wood, books, and plenty of space greets guests who venture upstairs at the new Caffe Bene in Chelsea. Opened in July, the spacious atmosphere is a welcome change to the concrete and steel of the city. The new Caffe Bene located at Seventh Avenue and 27th Street is the Korean coffee franchise’s seventh U.S. outlet.

Caffe Bene chose an expansive Times Square location for its U.S. debut February of last year. Coffee houses have also been opened in Flushing, New Jersey, California, and Dallas. Eleven more stores are planned for New York and another 13 stores across the United States; you may soon see one opening near you.

Caffe Bene calls itself a “destination of rest and relaxation amid the hectic scene of city living.” The brand’s philosophy is to create a gathering space in the tradition of European-style coffee houses. Caffe Bene wants to be a place for intellectuals to gather, a place to find inspiration. It hopes to attract with its selection of tea and espresso drinks, belgian waffles, artisan breads, scones, European pastries, and gelato.

Caffe Bene is Korea’s largest coffee franchise, surpassing Starbucks in South Korea, which has nearly 500 outlets. Concentrated in its home market, Caffe Bene has more than 850 cafes globally, with seven in the United States, 55 in China, and 2 in the Philippines.

On July 22 the company announced a franchise deal to open new stores in Mongolia and Cambodia by the end of 2013, according to the Korea daily Chosun Ilbo.

The push to expand overseas may have been accelerated by changes in 2012 to South Korean law governing franchises.

In an effort to protect individual franchisees as well as nonfranchise small- and medium-sized businesses, the Korea Fair Trade Commission issued a series of regulations restricting franchise growth. Coffee, bakery, chicken, and pizza franchises with over 100 outlets were restricted in licensing new outlets within certain distances of their existing outlets. For coffee shops and bakeries, the distance is 1,640.42 feet (500 meters).

These efforts have been continued in 2013 under Park Geun-hye’s “economic democratization” program, sources told The Financial Times. The program supports small- and medium-sized businesses and limits larger companies.

In March the company announced cuts to executive pay as well as layoffs citing new regulations restricting expansion of its coffee shops and other franchises the company owns. In 2011 Caffe Bene opened 306 stores, and in 2012 only 130. This was the first time the company cut jobs in its five-year history.

The Korea Herald reported that despite the continued growth of Caffe Bene’s revenues, some in the industry have said the cuts are related to the company’s growth strategy having relied too heavily on the franchise fees paid by franchisees as they open new stores. Analysis by the Korea Herald showed more than half of Caffe Bene’s sales are from interior decoration fees, and that the main business of coffee sales is losing money.

Then on April 1 of this year the company unveiled an aggressive growth plan to open 3,000 stores and more than quadruple annual revenues to $895 million by 2015. Caffe Bene’s combined revenues in 2012 were $186.9 million. Total Starbucks coffee houses including company-operated and licensed stores are more than 18,000 worldwide with revenues of over $13 billion, according to the company’s 2012 annual report.

Industry analysts in Korea greeted the announcement with a less than warm response, according to a Korea Times report, particularly considering the salary cuts announced only one week prior.

“This is an unrealistic goal,” said Yang Il-woo, a food industry analyst at Samsung Securities, reported Korea Times. “I think it (the goal) only shows the firm’s strong commitment for globalization but I don’t think the goal will be realized in the given time frame.”

Several calls to the company’s New York office were not returned.