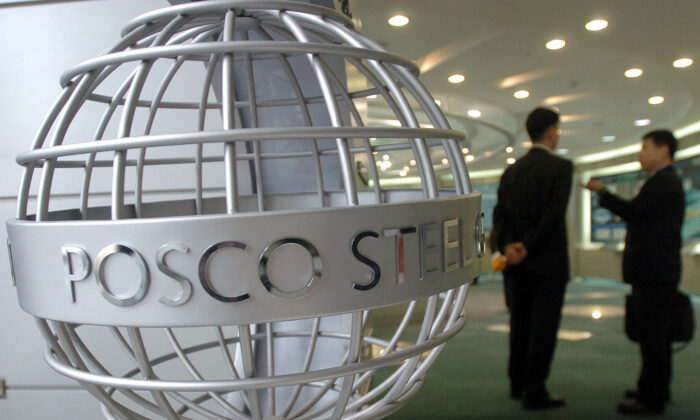 Business men talk at a lobby of the headquarters of POSCO, the world's fifth largest steel maker, in Seoul, on March 9, 2006. (Jung Yeon-je/AFP via Getty Images)
China Business & Economy

Korean companies in China have encountered operational difficulties due to strict power use restrictions. For these companies, a Korean expert says, it is useless to plead with Chinese authorities, regardless of the losses they suffer from the policy.

Pohang Iron and Steel Co. Ltd (POSCO), a Korean steel giant, recently told the Yonhap News Agency in Seoul that its stainless steel plant in Zhangjiagang city, Jiangsu Province, restarted in early October, with the operation rate maintaining at 80 percent. The plant was compelled to shut down by the local power restrictions in late September.

The power supply has not been completely cut off, citing a source the news agency, but as the local authority’s grip on electricity use for the day, the enterprise is limited to operate at night only.

The report says that most of the Korean companies experience difficulty in talking about the situation over concerns in maintaining a good relationship with the Chinese local authorities.

The insufficient power supply is not only affecting Korean companies, but all companies in China are facing the same problem, so it is difficult to make relevant requests to the Chinese side, said a staff member of the Korean diplomatic office in China.

Kim Dong-son, director of the overseas office of Korea Institute for Industrial Economics and Trade, a Korean national policy research institute, told The Epoch Times on Oct. 20 that rather than saying that these Korean companies in China are indecisive, it would be better to say they know it is useless to cry out about their difficulties.

Kim said the Chinese local authorities seemed to shift the responsibility of the power cuts policy to Beijing. But since everyone in China is suffering from a power shortage, Korean companies are not exempt from getting their power supply cut.

Even though some Korean companies could reflect the situation together through the embassy, they understand that this would not address the crux. “It is difficult to change the status quo,” said Kim. “So, nothing special for them can be done in respond [to the dilemma].”

Kim also noted that in China, it’s hard to imagine that companies will raise objections. Once the Chinese Communist Party (CCP) has proposed an energy policy, companies that fail to meet their targets would be restricted by the CCP and even ordered to stop production at any time.

“If it becomes a thorn in the eye of the CCP, the company will endure more serious scrutiny,” Kim added.

In fact, not all Korean companies in China are subject to power supply restrictions, as observed by Kim, “For example, semiconductor companies such as Samsung and SK Hynix, which defined as strategically important by the Chinese regime, are likely supplied with electricity.”

The impact of China’s power cuts policy on “some large companies like POSCO, whose factories in China are equipped with considerable automation and environmental protection devices, should be relatively less harmed, while on small and medium-sized Korean companies, would be the hardest blow.”

Kim also mentioned that “chimney companies,” like some car bolts manufacturers in Jiangsu Province, not only use a lot of electricity but also cause serious atmospheric pollution.

“Those companies are hard to get a concession from China’s power cut policy,” Kim said.

Kim holds the view that power shortages, to some extent, are caused deliberately by the restrictions policy of CCP. “China [CCP] adjusts energy policy through this kind of shock therapy, which is difficult for democracies and market economies to do so. But Chinese communist particular social system makes it possible.”

In recent years, power shortages and rising labor costs have driven many companies to move their production lines from China to Southeast Asian countries. “For companies, it is inevitable to produce in places where production costs are low,” Kim said.

Khasub Lee contributed to this article.