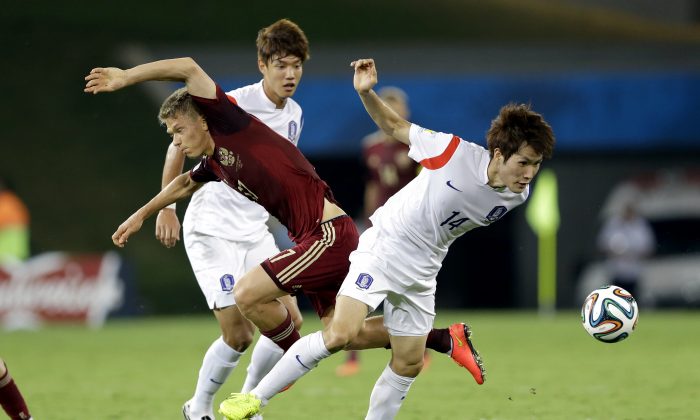 Korea and Russia were goalless at halftime, although there were close calls on both sides.

But Korea finally scored in the second half at the 69th minute.

Lee Keunho knocked in the goal from outside the penalty box.

Lee Keun-Ho of South Korea and Vasily Berezutski of Russia compete for the ball during the 2014 FIFA World Cup Brazil Group H match between Russia and South Korea at Arena Pantanal on June 17, 2014 in Cuiaba, Brazil. (Photo by Elsa/Getty Images)

Alexander Kerzhakov hit the ball in after a hectic series of kicks and knockbacks from the Korea goalie in the penalty box.

CUIABA, Brazil—Alexander Kerzhakov scored with one of his first touches after coming on as a substitute to earn Russia a 1-1 draw with South Korea on Tuesday in a World Cup match marked by the first big goalkeeping error of the tournament.

Russia goalkeeper Igor Akinfeev spilled Lee Keun-ho’s speculative shot into his own net to gift South Korea a 68th-minute lead at the Arena Pantanal in Cuiaba in Group H.

But Kerzhakov bailed his teammate out, turning in a shot from close range in the 74th — three minutes after coming on as a substitute — to rescue a point for Russia in a poor-quality match.