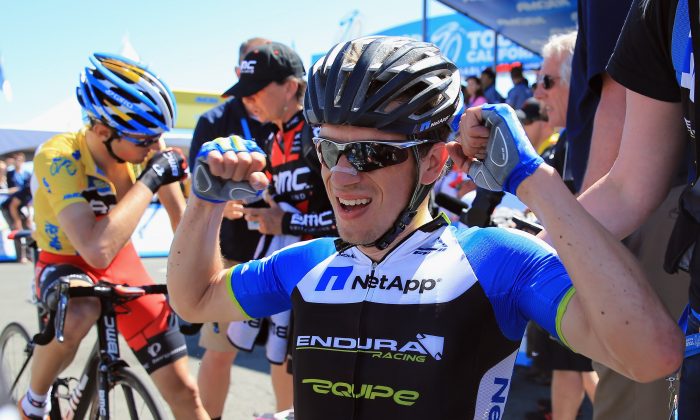 Leopold König of NettApp-Endura celebrates his victory as Tejay van Garderen of BMC Racing defended the overall race leader's yellow jersey in Stage Seven of the 2013 Amgen Tour of California from Livermore to Mount Diablo on May 18, in Clayton, California. (Doug Pensinger/Getty Images)
Cycling

Leopold König of NetApp-Endura showed the quality of his climbing legs, attacking the peloton to win Stage Seven of the 2013 Amgen Tour of California Saturday afternoon.

König won the race’s penultimate stage by attacking in the final 2.4 km of the 17-km climb to up Mount Diablo. The 25-year-old Czech caught Colombian climbing ace Janier Acevedo of Jamis-Hagens Berman two km from the summit, and attacked again 300 meters from the finish line. Acevedo couldn’t answer, and the NetApp rider won the stage by seven seconds.

Acevedo, who had worn yellow for three stages after his mountaintop victory in Stage Two, managed to move into third in General Classification, displacing Cameron Meyer of Orica-GreenEdge, who fell to fifth. The Colombian rider attacked 2.8 km from the finish, hoping to win the stage with one brief burst of speed, but he didn’t have the legs to match König at the finish.

Race leader Tejay van Garderen of BMC was shepherded to the top by his team mates, his yellow jersey never at risk. The 24-year-old rider form Tacoma, Washington will be crowned champion after Sunday’s Stage Eight, an easy 131-km jaunt from San Francisco to Santa Rosa, where it will end with a sprint to determine who will win the points jersey.

The only rider with a real chance to take the jersey from van Garderen was Saxo-Tinkoff’s Michael Rogers, who couldn’t outride the BMC leader and his team. Rogers, the 2010 winner, will have to settle for second overall.

“It was an unbelievable team effort,” van Garderen continued. “I knew they were strong, I knew they’d be motivated, but they went above and beyond expectations today.

“They made my life somewhat easy, although it still was a hard day.”

The race started with a flurry of attacks, none of which succeeded, until finally seven riders got away on the first categorized climb of the day, the Cat Two Morgan Territory Road.

The break had three minutes when it crested the Cat Three Patterson pass, 83 km into the 147-km stage and stretched it to four minutes on the descent. With 43 km to go, the Jamis team took over the peloton and lifted the pace, determined to set up a final charge for Acevedo.

The breakaway split up on the first slopes of the final climb, as Verona, then Schleck, then Westra attacked. Three riders tried to bridge across 14 kms from the summit; Chad Beyers of Champion System, and Antoine Duchesne of Bontrager followed Garmin-Sharp’s Lachlan Morton on the ultimately unsuccessful attempt.

The chase group and much of the breakaway were swept up six km from the finish, leaving Westra and de la Cruz alone out front. RadioShack’s

Jens Voigt attacked as the catch was made, hoping to steal another stage win. 5-Hour Energy’s Francisco Mancebo set off after the German powerhouse, and caught him within a kilometer. After another kilometer he caught and passed the two leaders.

Shortly after Acevedo caught Mancebo, König launched his attack.
BMC didn’t respond to any of these attacks. The only rider Van Garderen and Company needed to mark was Michael Rogers, and the Saxo rider never made a move—BMC kept the pace high enough that Rogers couldn’t attack.

Points Jersey Up for Grabs

The only score still left to settle on Sunday is the points classification, where Cannondale’s Peter Sagan leads Garmin-Sharp’s Tyler Farrar by a single point. Sometimes called the sprint competition, points are awarded for winning intermediate sprints and finishing stages in the top fifteen. Often intermediate sprint points go to breakaway riders who don’t actually sprint for them.

Peter Sagan, who has won nine Tour of California stages in the past two years, would like to add another. Farrar, who has a single stage win, very much wants both the stage win and the green jersey. This competition will keep tensions high throughout the stage.