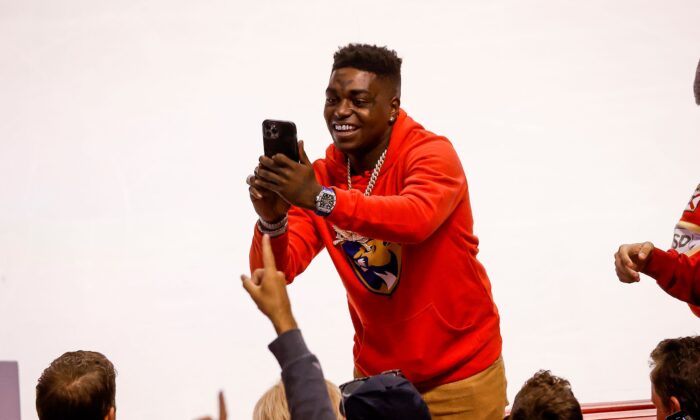 Rapper Kodak Black takes photos with fans during the third period of Game One of the First Round of the 2022 NHL Stanley Cup Playoffs between the Florida Panthers and the Washington Capitals at the FLA Live Arena in Sunrise, Fla., on May 3, 2022. (Joel Auerbach/Getty Images)
Entertainment News

Hip-hop star Kodak Black got a bad rap in his latest arrest, his attorney asserts.

The “Tunnel Vision” artist was taken into custody last Friday after Florida authorities found 31 oxycodone pills and $74,960 in cash in the rapper’s car in Fort Lauderdale, according to TMZ, but attorney Bradford Cohen claims the drugs were prescribed.

The lawyer told TMZ in a report published Wednesday that Kodak Black, 25, experiences pain after being shot in February and allegedly getting assaulted by guards while imprisoned in Kentucky prior to that.

Cohen confirmed to the New York Daily News that he made the statement that the pills were prescribed. He told TMZ that he’s given evidence of the prescription to prosecutors.

Kodak Black, whose real name is Bill Kapri, was reportedly charged with possession of a controlled substance without prescription, as well as trafficking in oxycodone.

“Never judge a case based on an arrest,” Cohen told TMZ following the arrest. “There are facts and circumstances that give rise to a defense, especially in this case. We negotiated a bond of $75,000 and we will move forward with resolving the matter quickly.”

Kodak Black, who was born in Pompano Beach, Fla., was previously sentenced to nearly four years behind bars for falsifying forms to buy weapons, but his sentence was commuted nearly two years early by former president Donald Trump in January 2021.