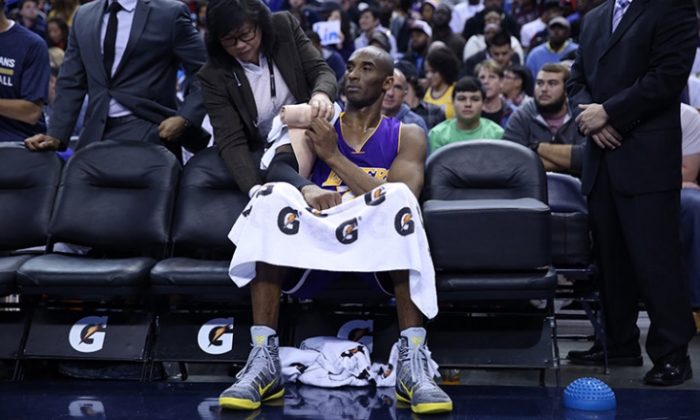 Kobe Bryant is injured again, and he could very well be out for the season.

If that’s the case, that could actually be good news for Lakers fans.

Without Bryant in eight games so far this season, the Lakers are playing better on both defense and offense. They’re 2-6 without him (10-26 with him), including the stunning 115-105 win over the Golden State Warriors on December 23. The Warriors have the best record in the league.

In two of the losses without Bryant, both on the road, the Lakers came close to taking down other top Western Conference teams. Los Angeles led Portland on January 5 with less than a minute left, but couldn’t finish off the game. The Lakers in late December were fairly close to beating the Dallas Mavericks, ending the game down four.

For those making the argument that Bryant is valuable to the team, there’s good news as well. Provided the Lakers either don’t improve much without him or actually decline without him, their position in the standings should remain largely unchanged. Los Angeles currently has the league’s fourth-worst record. If they finish outside of the bottom five, they relinquish their 2015 first-round draft pick to the Phoenix Suns as part of the Steve Nash trade.

Keeping that draft pick is critical for the near-term as the team tries to rebuild quickly. If the Lakers can pick up a nice player with that pick, and another nice one with the pick they acquired from Houston as part of the Jeremy Lin trade, and manage to attract several key free agents, they could have a shot at making the playoffs next season with those players, Bryant, Nick Young, and Julius Randle. The team could also pull off a trade or two.

The other part of the equation is Bryant’s longer-term health. There’s some noting that the new injury, which preliminary MRI results show is a rotator cuff tear in his right shoulder, has put his career in question. If he was forced to retire because of this injury, then it would obviously not be considered good news by many, although it would open up more cap space for LA. But if he can rehab through it and come back next season, the Lakers should be optimistic about the future.