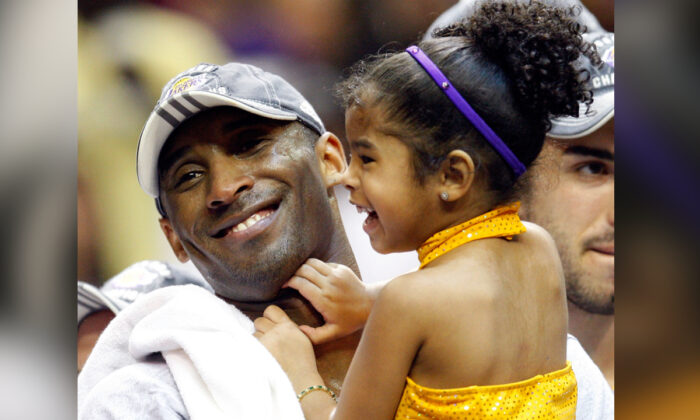 Kobe Bryant #24 of the Los Angeles Lakers holds his daughter, Gianna, after the Lakers defeated the Orlando Magic 99-86 in Game Five of the 2009 NBA Finals at Amway Arena in Orlando, Fla., on June 14, 2009. (Ronald Martinez/Getty Images)
US News

Los Angeles Lakers legend Kobe Bryant’s helicopter didn’t have a black box containing a voice recorder before it crashed in Southern California on Sunday, according to a National Transportation Safety Board (NTSB) official.

“There wasn’t a black box, and there isn’t a requirement to have a black box” on the aircraft, Jennifer Homendy, a member of the NTSB, said at a news conference on Monday. She said there was an iPad in the helicopter that included a flight application.

“It was a pretty devastating accident scene,” Homendy said. “We look at man, machine, and the environment, and weather is just a small portion of that,” she said. Investigators would review evidence and records tied to the pilot, helicopter, and the pilot’s company.

Officials noted that on the morning of the crash, fog was thick in the area.

“My concern is just the decision-making process, and if we weren’t flying in that weather, why was anybody else flying?” Los Angeles County Sheriff Alex Villanueva asked, reported NBC News. The Los Angeles Police Department said it had grounded its helicopter flights on that morning.

The City of Calabasas, California, where Bryant and his daughter died, confirmed his death on social media. NBA Commissioner Adam Silver later issued a statement in confirming their deaths on Sunday.

Meanwhile, a Change.org petition that was launched after Bryant’s death suggested the NBA redesign its logo to feature Bryant. As of Tuesday afternoon, it reached more than 2 million signatures.

“With the untimely and unexpected passing of the great Kobe Bryant please sign this petition in an attempt to immortalize him forever as the new NBA Logo,” the petition says. Currently, the NBA features former Los Angeles Lakers legend Jerry West.

“I will love Kobe forever and always cherish the time that I spent with him,” West said in a statement. “I watched him grow from an energetic kid into the man he became, making a difference in so many people’s life. He has left the world a better place. Kobe’s legacy will live forever.”

“I’m Not Ready but here I go. Man I sitting here trying to write something for this post but every time I try I begin crying again just thinking about you, niece Gigi and the friendship/bond/brotherhood we had!” James wrote on Instagram, referring to Bryant’s 13-year-old daughter, Gianna, who also died in the crash.