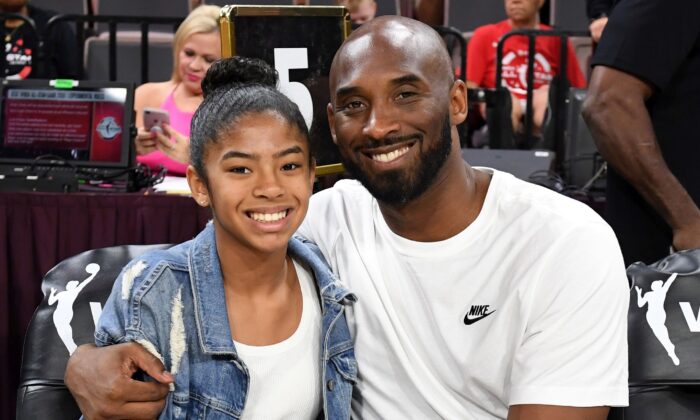 'There are no words to express the pain I’m going through,' says Shaq
By Jack Phillips

NBA commissioner Adam Silver on Sunday evening confirmed Kobe Bryant and his 13-year-old daughter Gianna were among those who died in a helicopter crash in California.

Silver wrote in a statement, “The NBA family is devastated by the tragic passing of Kobe Bryant and his daughter, Gianna,” who was known affectionately as Gigi.

“He will be remembered most for inspiring people around the world to pick up a basketball and compete to the very best of their ability. He was generous with the wisdom he acquired and saw it as his mission to share it with future generations of players, taking special delight in passing down his love of the game to Gianna,” Silver said. “We send our heartfelt condolences to his wife, Vanessa, and their family, the Lakers organization, and the entire sports world.”

“There are no words to express the pain I’m going through with this tragedy of losing my niece Gigi & my brother @kobebryant. I love you, and you will be missed. My condolences to the Bryant family and families of the other passengers on board. I’M SICK RIGHT NOW,” he wrote on Twitter. O’Neal and Bryant won three championships together.

The City of Calabasas, California, confirmed his death on Twitter after numerous news outlets reported on the development. In an afternoon press conference, sheriff’s officials did not confirm whether Bryant or his daughter died in the crash. The identities of the other people on the helicopter were not revealed.

There’s no words to express the pain Im going through with this tragedy of loosing my neice Gigi & my brother @kobebryant I love u and u will be missed. My condolences goes out to the Bryant family and the families of the other passengers on board. IM SICK RIGHT NOW pic.twitter.com/pigHywq3c1

A fellow teammate of both O’Neal and Bryant on the Lakers, Bryan Shaw issued a statement: “For those Kobe fans that are out there, that are feeling like I feel right now, just try and think of all the joy that he brought you.”

“Struggling to process what is now a reality. Kobe’s life after basketball was just beginning, and his second act was going to be even greater. His legacy, Gigi’s legacy both will live on forever,” wrote ex-teammate Derek Fisher.

Bryant, considered among the greatest players in NBA history, departed the league in 2016 after spending his entire career with the Los Angeles Lakers. During his career, he won five championships, he was named to 18 All-Star games, and retired as the third-leading scorer in NBA history.

On Saturday, current Lakers star forward LeBron James passed him for third place in scoring history during a game in Philadelphia.

“Continuing to move the game forward [at] KingJames,” Bryant wrote in his final Twitter post about the moment. “Much respect, my brother.”

Federal Aviation Administration spokesman Allen Kenitzer told KTLA that the helicopter was a Sikorsky S-76. It was not known what caused the crash.

A local man, Colin Storm, told the news outlet that it “was very foggy” when he heard what sounded like a helicopter flying low. “Then we heard some sputtering, and then a boom,” he said.

News of his death resonated throughout the sports world.

Los Angeles Mayor Eric Garcetti described Bryant as a “giant who inspired, amazed, and thrilled people everywhere with his incomparable skill on the court—and awed us with his intellect and humility as a father, husband, creative genius, and ambassador for the game he loved,” KTLA reported. “He will live forever in the heart of Los Angeles, and will be remembered through the ages as one of our greatest heroes,” he added.

In a statement after his death, the NBA player’s union said: “We are stunned and devastated by the news of the sudden passing of Kobe Bryant. Words cannot express his impact on our Players, the NBA, and the game of basketball. This is a monumental loss for the entire community, and our hearts are quite simply broken. We send love and prayers out to his wife, Vanessa, and the entire family.”