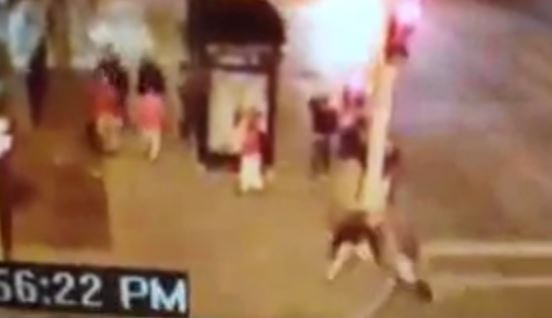 A “knockout game” attack that happened in Milwaukee was captured on video.

The video was uploaded to YouTube and hasn’t been authenticated, but appears to be the recent attack on 53-year-old Tim Bessette last week.

Bessette told police that he was trying to cross the street after he noticed four youth following him. One rushed up and sucker punched him, a hallmark of the “knockout game” attacks, which rarely involve robbery.

“As these young fellows took off, I can remember hearing them laughing and giggling amongst themselves. You could kill somebody,” Bessette said, reported WITI.

Bessette had to go to the hospital after suffering a broken nose and other injuries.

“I’ve gone through a nightmare in the past several days. My left eye — this is the first day I can see out of it. It was so swelled up I couldn’t see,” Bessette said.

He said that he hopes whoever the youth brag to will go to the police and help identify them.

“I could be right now in your city morgue. It’s scary,” Bessette said.

The Milwaukee Police Department said in a statement that it is investigating the case, and emphasized that the “knockout game” attacks are not a game, “but are in fact crimes that can be categorized as battery and/or robbery.”

The department added: “We recommend that all pedestrians remain alert and aware of their surroundings at all times, as experience has shown that inattentive lone pedestrians are preferred targets of street crimes.”

Knockout Game: Are Perpetrators Mostly Black People? And How Far Does it Go Back?